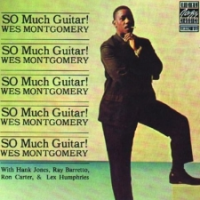 Wes Montgomery's So Much Guitar! continues the latest round of re-releases/re-masters from the Concord Music Group, celebrating the 60th anniversary of Riverside Records. So Much Guitar! follows the re-releases of singer and trumpeter Chet Baker's Chet Baker Plays The Best Of Lerner & Loewe (OJC/Riverside, 1959/2013) and Mulligan Meets Monk (OJC/Riverside, 1957/2013) in the label's birthday celebration.

Montgomery enjoyed a productive stay at Riverside between 1958 and 1963, making many of his most memorable recordings. So Much Guitar! falls between the release of 1960's breakthrough recording The Incredible Jazz Guitar of Wes Montgomery and 1961's Wes and Friends. In total, Montgomery would records a total of 18 long-playing albums for Riverside before moving to Verve in 1964.

The re-release of So Much Guitar! includes all of that original release plus all of the Montgomery Brother's 1961 Fantasy recording The Montgomery Brothers In Canada. The original tapes of the So Much Guitar! session were accidently erased, leaving no alternate takes to consider for inclusion. The decision to add the live material turns out to be a big plus, offering the listener the comparison of Montgomery with two vastly different rhythm sections.

So Much Guitar! pits Montgomery against a young, but accomplished Ron Carter on bass with pianist Hank Jones and percussionists Lex Humphries and Ray Barretto. The set features a well-behaved and swinging collections of standards and originals where Montgomery shows off his octave playing. Jones is perfectly tasteful while Carter reveals his perfect time that would guide Miles Davis's second great quintet just five years later. The inclusion of Barretto on congas adds a layer of rhythmic sophistication that fills out the musical background properly. The band is most effective on Montgomery's "Twisted Blues" and the minor- key blues "Something Like Bags."

The live material was recorded at The Cellar in Vancouver in the Spring of 1961. Montgomery is joined by brothers bassist Monk Montgomery and vibraphonist Buddy Montgomery. Paul Humphrey plays the drums. This is a quartet with the piano replaced by the vibes. The effect is an overall softening of the band's swing. Claude Thornhill's iconic "Snowfall" is given a post-modern treatment that remains true to the such textures of the original while exposing the piece's ribs. It is a showcase for Buddy Montgomery. The vibes-guitar axis proved to be an improvisatory playground for the brothers, who were tethered to the beat by another brother. On "Angel Eyes" the approach was most effective, as well as on "On Green Dolphin Street." The re-issued So Much Guitar! is a great set all around.


Tracks: Twisted Blues; Cotton Tail; I Wish I Knew; I'm Just A Lucky So And So; Repetition; Something Like Bags; While We're Young; One More For My Baby; Jeannine; Snowfall; Angel Eyes; Barbados; This Love Of Mine; On Green Dolphin Street; You Don't Know What Love Is; Beaux Arts.