By JACK BOWERS
October 3, 2005
Sign in to view read count 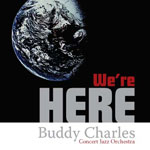 In the interest of full disclosure, I must confess at the outset that I wrote the liner notes for We're Here—twice! It's a long story, but in essence, the album was recorded in 1993 (when I was first asked to write the liners) and was not released until this year (when I agreed to rewrite them). Obviously, one who has praised an album in advance won't be likely to disparage it in the present tense, and that is certainly true in this case. So now that you know where I'm coming from, you are free to consider what follows less a review than an introduction to the world-class Buddy Charles Concert Jazz Orchestra.

Buddy Charles is a part-time drummer and bandleader who made his living building homes in Nevada. Business was good, so much so that he decided about a dozen years ago to use some of the proceeds to assemble and record a big band—not just any band, mind you, but the best one he could build (pun intended). Buddy flew to Los Angeles, hired a number of the area's most talented musicians, gathered them in a studio and recorded We're Here, a spectacular album marked by its close-knit esprit de corps, impressive solos and superlative charts by Jack Montrose, Don Hanna, Gordon Brisker and Frank Mantooth.

End of story? Not quite. Even though the album was everything Buddy had hoped it would be, it took twelve long years—and some luck—to transpose it from studio to disc (a more unabridged account is included in the liners). Better late than never, though, as the music sounds as fresh as if it were recorded this week. As for the orchestra, I mentioned that it is world-class, and a glance at the personnel readily affirms that. Even the occasional sub—trumpeter Wayne Bergeron, trombonist Andy Martin, bassist Trey Henry—is a hugely in-demand player. Two of the regulars, tenor saxophonist Brisker and pianist Pete Jolly, are, alas, no longer with us, but their playing here is consistently impressive.

Brisker wrote "Lester Leaps Out and "When I Close My Eyes, Charles "We're Here and "Dama de la Noche (both orchestrated by Hanna), Montrose "Quiet Knowing, "Long Story Short, "Sweet Bird's Yard and "Particles and Forces, Mantooth "Nevada Bravada. Mantooth, another prodigy who left us much too soon, also arranged Miles Davis' "Freddie Freeloader and the standard "We'll Be Together Again (the last a showcase for tenor saxophonist Pete Christlieb). Christlieb is one of a number of exemplary soloists who include Jolly, tenors Brisker and Montrose, altos Gary Foster and Charlie McLean, trumpeters Carl Saunders and Warren Luening, trombonists Bob McChesney and Bill Watrous, and baritone Jack Nimitz.

I won't dwell on specifics, as any remarks could be construed as biased. Suffice to say that Charles conducts a forty-karat ensemble, and the album they've produced is golden.