By BRUCE LINDSAY
February 19, 2014
Sign in to view read count 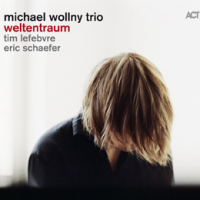 The inventive German pianist Michael Wollny combines a delight in exploration with an impressively high work rate. As a result, he's become one of the European jazz scene's most prolific and most unpredictable performers. Weltentraum is the debut recording from the Michael Wollny Trio, a piano, bass, drum collaboration that on the surface at least bears a striking resemblance to [em], Wollny's previous piano, bass, drums collaboration. Given that [em] was one of the most enjoyable and talented bands on the circuit, that's no bad thing.

Like [em], the Michael Wollny Trio records for ACT Music, features the excellent Eric Schaefer on drums, mixes original tunes with selections from classical, rock, and pop composers and favors acoustic instrumentation. So what's the difference between [em] and the Michael Wollny Trio? The bottom end. [em] featured bassist Eva Kruse. The Michael Wollny Trio features bassist Tim Lefebvre. The variation may be marginal, but overall swapping Kruse for Lefebvre seems to give the Trio a lighter touch—not better, but different.

Only two tunes are Wollny originals—"When The Sleeper Wakes" and "Engel." The rest of the collection is gathered in from across the world and across the centuries. The Flaming Lips, Paul Hindemith, Alban Berg and Edgard Varèse all add to the track list—even dear old Friedrich Nietzsche gets in on the act with "Fragment An Sich" parts 1 and 2.

"Little Person," composed by Jon Brion for the movie Synecdoche, New York (2008) is the prettiest tune on Weltentraum—a delicate, gentle, number on which all three players make beautifully-judged contributions. Berg's "Nacht" runs it a close second, but Schaefer's emphatic drumming gives it a harder edge. Wollny's own "Engel" is just as pretty to begin with, developing a tougher vibe as it progresses.

The album's only vocal number is also one of its most intriguing interpretations. Wollny takes Pink's "God Is A DJ" and strips it bare of the original's sass and funkiness. Guest vocalist Theo Bleckmann takes over the role of lead singer. Wollny slows things down, spooks things up and gives the song a darker, more downbeat and rather psychotic undertone (helped by some judicious use of harpsichord). Pink's 'third eye' sounds like a throwaway line, Bleckmann sings about it like he actually has one.

If God really is a DJ, then this is just the kind of song He might slip on to the turntable at the end of the night to clear the dancefloor. The revellers are likely to make frequent furtive glances over their shoulders as they walk nervously home. It's the kind of adventurous, slightly tongue-in-cheek interpretation that makes Wollny such a joy—and makes Weltentraum such an exciting and constantly rewarding album.