: Welcome to the Club 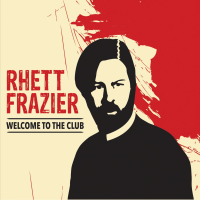 Rhett Frazier was born and raised in Texas and Oklahoma, by a family deeply steeped in every strain of America's soul music. And born and raised to vocally stomp through soul and funk. Grandpop played guitar and fiddle in a western swing band. Cousins Alan and Mike are bluegrass and country music mainstays, The Frazier Brothers. Uncle Mick Roemer is a jazz pianist and singer.

After fronting several incendiary blues bands that barnstormed through Texas and Oklahoma, Frazier traveled to Los Angeles to record his dream album—a soul record in the classic southern styles of Hi Records and/or Stax Records. But like so many music business dreams, Frazier's dream got shelved. It was never released.

Instead, the singer turned the page with two skeletal funk albums as Rhett Frazier, Inc.: 2010's Escape from Dee-Troyt (Digi-Soul}; and 2012's Every Day is Saturday (Double Inc.), which became mainstays in the LA electric soul scene.

But in 2017, Frazier made his own dream come true by releasing that dream album his damn self. Welcome to the Club proves that he was absolutely right to stay committed to that dream. Produced by Dusty Wakeman (mixmaster for country artists Lucinda Williams and Dwight Yoakum) and featuring Dick Sims (from Eric Clapton's band) on keyboards and soulful Hammond B-3, plus multi-horn player Lee Thornburg (Tower of Power), it captures all the disparate threads of Frazier's vision.

In this swirling soul cauldron, the Scottish edges on Frazier's voice take on the powerful spiritualism of Van Morrison, digging deep into Ray Charles soul, especially when Frazier vamps out the closing to the title track and "Holy Pimp," where he wails like Little Richard sitting on a red-hot poker.

"Always on the Outside" compacts rock and soul and rhythm and blues into three sparkling minutes, the kind of fifties soul that Peter Wolf so often and so lovingly resurrected in The J. Geils Band. "Stalemate" slowly but steadily cooks up Memphis blues bubbling with soulful organs, mournful guitars, and just enough backbeat to keep the music from standing still; it's a musical shame that Prince didn't live to cover this soulful blues in his inimitable purples.

But nothing surpasses Frazier's cover of the Jimmy Miller/Steve Winwood classic "I'm a Man," graced by the vocal presence of Mr. Spencer Davis in its backing chorus. You can tell from the pounding bass, cool as ice congas, and clawing guitar chords in its introduction that Frazier's going to use his voice as both scalpel and axe to tear this playhouse down. By the end of it, Frazier's stomping and snarling at the edges of his range like a shaman seeking possession. You simply cannot sing this song any better.

It's entirely possible that Welcome to the Club makes your own soul dreams come true, too.