By HRAYR ATTARIAN
February 14, 2012
Sign in to view read count 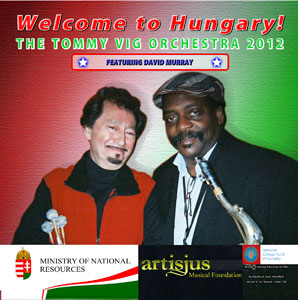 Although not as well-known in the US as his compatriots Attila Zoller and Gabor Szabo, percussionist Tommy Vig is every bit as talented as the two guitarists with a unique vision and unrelenting quest for perfection.

Born in Budapest, Vig was a child prodigy, having recorded on drums at the tender age of eight. Political climate forced him into a self-imposed exile to the US where he made a living playing behind other jazz musicians, vocalists and on film soundtracks while simultaneously furthering his calling of modern composition.

Awestruck by Albert Ayler (whom he saw during the latter's tenure at The Village Vanguard in the mid-1950s), he never abandoned a healthy respect for free jazz and progressive musical explorations. Two of his pieces became part of Stan Kenton's repertoire, but unlike the latter's work Vig's own big band forays have a loose and gritty feel to them, infused with a cinematic and edgy expansiveness like that of Gerald Wilson.

This is clearly heard on Welcome to Hungary!. On "Sahara," the orchestra builds its sound around David Murray's edgy tenor, replete with honks and screeches. This echoes the vibraphone and saxophone duet that opens the tune, with Vig's angular and sparse mallet strikes building an ambience around Murray's complex and satisfying free blowing. A similar vibes/tenor improvisation opens the celebratory "Now is the Time in Hungary," a Vig original that explodes with the bright colors and brassy sound of the horn heavy ensemble.

Intros of this sort appear on almost every track, featuring either a Murray/Vig ad lib dialogue or the vibraphonist a capella. These surface similarities lead to a thematic unity and not to repetitious monotony. One of the highpoints of the recording is "Vig Corn," a ballet like melody built upon a Hungarian folk song that features Rozsa Farkas, on cimbalom (a Magyar hammered dulcimer), and Balazs Cserta on the bass clarinet-like tarogato. These ethnic instruments are also heard on the "Body and Soul"-inspired "Buddy and Solita," that features Vig's percussive drumming and Murray's edgy saxophone mixing avant-garde explorations with quotes from the original ballad.

The CD also contains bonus material featuring a slimmed-down version of the group playing two traditional airs featuring Vig's life partner, evocative singer Mia Kim; a percussion-heavy and wonderfully harmonic "I Told You"; the cimbalom based waltz "Only You"; and a whimsical parody of The Beatles' "Michelle" that sounds like a Mozart Divertimento.

The accompanying booklet contains copious liner notes by Vig that is part introduction to the disc, part memoir and part witty and acerbic observation on music and politics. The album as a whole is a well-rounded and delightful introduction to an artist who deserves long overdue recognition as a composer, improviser and instrumentalist.

Sahara; Buddy and Solita; Now is the Time in Hungary!; Rise and Shine; In Memory of Dizzy; In Memory of Monk; Only You; Vig Corn; Bonus tracks: I Told You; Only You; Me Shall; Veled Vagyok Meg Gondolatban; Fustbe Ment Terv.