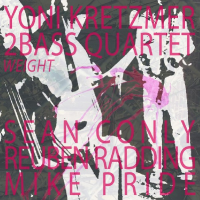 Israeli saxophonist Yoni Kretzmer is one of the promising musicians that emerged from Israel's small and familiar scene. He has a unique musical vision, is well-versed in the history of the forward-thinking genres of jazz and is fearless and ambitious. So it is no surprise that, after relocating to New York, he formed a working group with local, like-minded musicians.

The 2Bass Quartet debut is released after a yearlong series of performances that solidified the sonic aesthetics of the quartet: a deeper, open sound that enjoys the emphatic interplay between bass players Sean Conly and Reuben Radding; the sketchy time-keeping of drummer Mike Pride; and Kretzmer's assured sax playing and unorthodox musical ideas.

All compositions were written by Kretzmer and leave room for everyone in the quartet. The opening "Number One" is typical to the repertoire of this quartet, moving organically between slow, expressive and contemplative playing that includes remarkable arco bass duets, to soaring sax outbursts and powerful drumming; but it has a clear melodic narrative. "Giving Tree" and its shorter reprise version "GT Reprise"—as well as "Again And Again" and " A Bit Of Peace"—are based on a loose structure that enable the quartet to move instantly from tight, rhythmic segments to subdued free improvised parts that highlight the two distinct sounds of its bassists, the telepathic communication between Kretzmer and Pride, and the passionate playing of all four musicians.

"Number Three" sound as if all four musicians are pushing into different roads. Pride is busy articulating a rolling rhythm while Conly and Radding improvise on abstract deep tones and Kretzmer produces low, whispering sounds. Surprisingly, these counter-musical acts eventually form a massive, cohesive sonic entity that manifests the essence of the quartet. Each member can lead and challenge the other musicians with his own ideas, but everyone is tuned and responsive to each others' contributions. Deep listening and immediate, intuitive creativity.

A remarkable debut that demands future documents from this quartet.