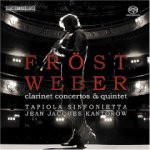 Whatever you do, do not believe that 18th Century clarinet music begins and ends with Mozart's Clarinet Concerto in A major, K. 622. An unsurpassable piece of music, to be sure, but Mozart laid the groundwork for many composers for winds after him. One such composer was German early Romantic Carl Maria von Weber (1786- 1826, a distant relative of Mozart's wife, Constanze). Better known for his operas, Der Freischutz and Oberon, Weber did manage two clarinet concertos and a clarinet quintet before his early death to consumption.

Weber's clarinet music has received healthy attention in the 20th Century from Benny Goodman (RCA, 1990) to Sabine Meyer (EMI, 2003) and brother Paul Meyer (Erato, 2002) to Emma Johnson (ASV Living Era, 1997) and Dame Thea King (Hyperion, 1993). All are exceptional performances, asking the question, is there room for more? Of course there is and in BIS SACD sonics to boot... audience, meet Martin Frost.

A native of Sweden, Frost has blazed quite a trail with prominent international orchestras and soloists. If there is currently the next "big thing" in classical clarinet, it is Martin Frost. These Weber works follow critically acclaimed releases of Schumann (BIS, 2002), Mozart (BIS, 2003), and Brahms (BIS, 2005). In 2007, Frost turned his attention to Danish composer Carl Nielsen with splendid results.

And Frost's Weber? The soloist draws every bit of sunlight there is in the Concerto No. 1, even warming up the Adagio ma non troppo. Frost's modulation is breathtaking and his grasp of Weber demonstrates Weber's debt to Mozart. While an abashed Romantic, Weber composed his clarinet concertos in the Classical vein. The Clarinet Quintet is equally fine, Weber making the stings sound like a full orchestra (the original little big band) while Frost polishes the dark hues of the slower movements to a Romantic gleam.

The Concerto No. 2 is nothing short of superb with Frost's modulation taking center stage, infusing the piece with playful joy. The clarinet has often been considered the most melancholy of classical instruments, but in Martin Frost's hands, the difficult instrument sings and sighs.