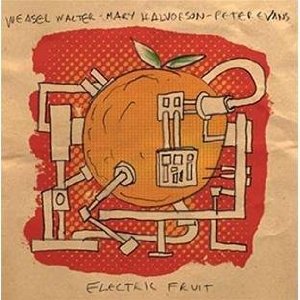 Percussionist and improviser Weasel Walter often uses the term "face rip" to describe a particularly intense musical experience. In improvised music, you often don't get a "blood and guts" approach; free jazz, in many instances, has been squeezed to the point that to remain relevant, it must often have structured erudition applied to it. That's understandable, of course—rarely can a musician go for 40 years blowing his or her lungs out and not look for something else to do, and while it is "something," free blowing is not "everything."

Giving it your all doesn't necessarily mean with eviscerating intensity, but that being said, in much historically challenging music, there has become an aspect of staidness that is tough to fight off. A look at the linguistic tropes Walter uses to describe the music available on his ugExplode label website—"fury," "speed," "agitation," "extremities," "energy"—gives a basic idea of what he's going for, along with album titles like Revenge, Invasion, Blood of the Earth, Revolt Music or Destroy All Music. It's a far cry from the spirituality or wry obscurity peppering free music from America and Europe in the 1960s and 1970s, instead proffering an aesthetic battleground. Whether or not that sense of confrontation is relevant in a grayish pluralistic society such as exists at this point, the sentiment is nevertheless not lost.

Walter first became known around Chicago in the early 1990s with The Flying Luttenbachers, a punk-free jazz combo that first featured veteran multi-instrumentalist Hal Russell; later conscripts included saxophonists Chad Organ, Michael Colligan, and Ken Vandermark, guitarists Chuck Falzone and Dylan Posa, bassist Kurt Johnson, and many others. Spending the first decade of the new millennium in the Bay Area, he worked more regularly in free improvisation with artists such as bassist Damon Smith, guitarist Henry Kaiser and reedmen Aram Shelton and Elliott Levin, as well as punk bands like Burmese and XBXRX. Now based in New York, he's integrated himself into that environment, co-leading a group with former Cecil Taylor Unit drummer Marc Edwards and working with a slightly younger generation of expanded-technique free players. Two of those co-conspirators are guitarist Mary Halvorson and trumpeter Peter Evans, whom he joined forces with while still in the East Bay; Electric Fruit is their first official album together, though he's collaborated with each on record previously, and it's also his first appearance on the Thirsty Ear label.

It's easy to intellectualize the work of Halvorson and Evans, to an extent—they're both part of a coterie of young musicians whose work falls into the "extended technique" bag, though of course that's not all they are capable of. Evans uses circular breathing, multiphonics, chuffs and flicks as part of a language relating to the work of such avant-garde trumpet pioneers as Bill Dixon and Toshinori Kondo, as well as contemporaries Axel Dorner and Nate Wooley. Mary Halvorson's approach to the guitar (she's also an excellent composer) is peppered with wide interval leaps, alternate tunings and volume-pedal chicanery; she's worked in the ensembles of composer-reedman Anthony Braxton as well as in the math-rock band People, so her pedigree is extraordinarily diverse. In practice, and combined with the utterly detailed, often angular approach in Walter's percussion work, the level of fleet interaction is quite staggering, yet seems distant from the free-action intensity of some of Walter's more skronky ensembles.

While the music is continually active, there is a sense of space to it, an oddly condensed openness or latticework that, from a percussive angle, is reminiscent of Paul Lovens' "selected and unselected" drum and cymbal work and its constant flow of gestured clatter. Trumpet, guitar and drums don't necessarily evoke the same vision of density as a reeds-bass-drums outfit or, for that matter, a heavyweight piano trio. Nevertheless, moderate volume and a constancy of improvising contribute to a rather thick overall effect, coupled with an extraordinary array of contrasts.

Spiky flits set the stage on "Mangosteen 3000 A.D." and quickly erupt into a wide, circular swath of trumpet peals and fuzz guitar, Evans moving into an area of Lester Bowie-esque darts and bravura ever denser against refracting six-string swirl. Halvorson and Evans carve a holding pattern of repetition against thick bash, but that's gone in an instant with damped rattle and puckered whine. Actions move so quickly that they're difficult to recount even if one is paying attention; classically-poised brass and distorted inversions are joined at the hip by Walter's coppery plink and terse rustle. Even when the drums drop out at seven-odd minutes in for a trumpet-guitar duet, Evans fills his statements with clambering verbosity so any respite is slight indeed.

Speed is an important fact of this music, and in the hands of players with technique in spades, it can be a bit of a daunting experience—but that's not to say there aren't hints of bona fide melodicism on display here. Halvorson weaves a psychedelic, reverberating carpet underneath Evans' hot valve blasts in the introductory minutes of "The Stench of Cyber-Durian" and puts gauze into the proceedings, only to return with raucous distortion against a tumbling drum-and-bugle corps. For the most part, the three retain links to what their instruments "should" sound like at their loosest, though at times indeterminate metallic pierces could have either cymbal or breath-orientation. As choppy as Halvorson's pedal-actuated movements are, their origin is clear even as the poles reverse from meaty hacking to Billy Bauer-like strums or wiry koto-derived harmonics, and Evans at his most guttural and strange is still, at heart, a trumpeter with a very crisp attack and an understanding of the instrument's traditions.

This is, like all of Walter's groups, a very democratic ensemble and any discussion of Electric Fruit should focus on that fact—as forthright a drummer as he is, Walter is a player who listens very well and whether supporting or ricocheting off his bandmates' phrases, his improvising is far from the music's lone focal point. That being said, on "Scuppernong Malfunction" the roto-tom patter, woodblock needling and snare bombast he pushes through around feedback and Evans' clarion salvos is difficult not to take notice of, moving the collective direction from swaying shards to syrupy thud. This is incredibly direct music and, while not "rough around the edges" in the same way that Walter's other work often is, Electric Fruit has an undeniable presence and reflects what's both doable and necessary at this point in time.