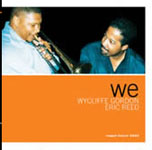 German label Nagel Heyer knows a good thing when it sees and hears it. This is the third time it has brought New Orleans/post bop trombonist Wycliffe Gordon and contemporary jazz pianist Eric Reed into the studio. But stylistic classifications are set aside when they get together. These two clearly have a special bond which comes through in the fun and excitement they have with the tunes they play with their extraordinary talents. The play list pretty much resembles their first two releases although this time there's no Monk. There's a fair amount of gospel oriented music along with some originals by each of the stars. "He Looked Beyond My Fault", which was on one of their earlier efforts, shows up again. The other major difference is that they are by themselves here. No one else is around to help out or get in the way, depending on your point of view. And they do have a grand time with the music. On "Embraceable You", for example, Gordon comes close to a Tricky Sam Nanton wah wah mute trombone for this classic standard laid on top of a romantic elegant piano by Reed. Quite a contrast and they pull it off magnificently. "The Lord's Prayer" is outright adorational with the unsullied trombone tone of Gordon riding on top of the dramatic piano of Reed. One feels almost compelled to stand up out of respect. It's like going to church and discovering two of the country's top jazz players are doing the music. Gordon reminds everyone that he can sing a tune or two with nonsense lyrics on "This Rhythm on My Mind" and with a bunch of wordless vocalizing.

In this day and age of record companies and performers striving to find something different, working hard, and usually failing, to merge jazz with all sorts of other popular music styles, Nagel Heyer simply gets two very talented young jazz artists into the studio and lets them take off. The results are extraordinary. Good stuff and recommended. Learn more about the record company and the performers by going to the following web sites, www.ericreed.com, www.music.msu.edu/faculty/gordon.html and www.nagelheyer.com.

The Lord's Prayer; Paris Blues; This Rhythm On My Mind; Embraceable You; Precious Lord Take My Hand; Lament; Toast My Bread; He Looked Beyond My Fault; He Cares. (Total Time: 55:15).