By DAVID A. ORTHMANN
December 9, 2018
Sign in to view read count 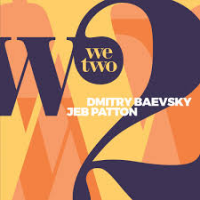 Alto saxophonist Dmitry Baevsky and pianist Jeb Patton constitute a crackerjack, precision jazz instrument, stretching and bending the fundamentals of bebop into full-blown statements that render the absence of a bassist and drummer superfluous. The individual heroics that one expects of bop are in evidence, but it's the ways in which the duo maneuvers as a unit that really matters. Baevsky and Patton are middle-aged jazzmen with a wealth of experience working in bands, together and separately, all over the world. These experiences, plus their never-ending hours of practice and reflection, and an ongoing commitment to development and change, resound throughout the disc's ten tracks.

The materials of We Two are comprised of not-often-covered compositions by Horace Silver, McCoy Tyner, Duke Ellington, Charlie Parker, Jimmy Heath, and Cole Porter, plus Baevsky's "Something for Sonny," which sits nicely alongside the work of his celebrated predecessors. The treatments of the heads are noteworthy in themselves. During up-tempo selections, Baevsky's and Patton's interlocking parts allow for brief, audacious interpolations. Patton darts in and out of the melody of "Inception" and "The Serpent's Tooth," adroitly juggling harmonic, rhythmic and melodic roles without breaking stride. His support of Baevsky's solos throughout is befitting a musician whose concern with accompaniment extends to publishing two instructional books on jazz piano comping.

On "Something for Sonny" and "Fools Rush In" the duo engenders a relaxed, affable, soft-shoe swing that serves as a reminder that bop is often lighthearted and easily accessible. "Quasimodo" almost feels suspended in space, not overtly declaring a strict tempo as Baevsky and Patton execute the melody in unison. The head of "You'd Be So Easy to Love" is played a couple of ways. At the onset Baevsky confirms his credentials as a balladeer, sincere and vulnerable while subtly offering fluctuating dynamics and emotional nuances. On the way out of the track the duo sounds livelier but no less heartfelt.

The character of individual solos is invariably tied to the tenor of the material. Baevsky's turn on "Don't Let the Sun Catch You Cryin,'" another deliberately paced, low-keyed cut, forsakes the long, rapid, lank chains of notes that are characteristic of his style. Instead, Baevsky usually pulls up short, thoughtfully ending phrases before they become lengthy and unnecessarily self-sufficient. The relationship between Patton's left and right hands—loose, inquisitive, yet ultimately stable—is evident throughout the pumped up "Inception" where chords jab at the rush of his single note lines.

Establishing a clear-cut identity, individually and collectively, while navigating the dictates of a fundamental jazz genre is no mean feat. Baevsky's and Patton's contributions to the bop tradition make for invigorating listening. Highly recommended.

Swingin' the Samba; Something for Sonny; Inception; Le Suerier Velours; All Through the Night; Don't Let the Sun Catch You Cryin'; Fools Rush In; The Serpent's Tooth; Quasimodo; You'd Be So Easy To Love.