Home » Jazz Articles » We Thought We Could Change The World

We Thought We Could Change The World 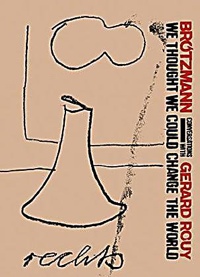 There are many worthy books on jazz, its history and growth, that provide insight into how the art form has influenced other genres and developed in different locations. This effort is a worthy addition.
In this personal and enlightening book Peter Brötzmann is in conversation with Gerard Rouy. Rouy is a French journalist and photographer who worked for Jazz Magazine, Paris from 1970 to 2009. Already familiar with the music, he first heard Brotzmann play in 1971 and found something special in free form jazz. Over forty years, Rouy has had conversations with Brotzmann and recorded much of the results. A lot of the detail was gathered whilst the 90 minute, 2012 Soldier of The Road was filmed. The movie is about Brotzmann, but Rouy felt further information gathered which could not be included in the film was too valuable to lose. He put it into a book, along with other information garnered over the years he has known Brotzmann. The reader is given insights into Brotzmann's life from his boyhood after World War II, his family, the strong influence of his Prussian father and through to the present day with his thoughts about music. It is divided into two sections; the first concentrating on music and the second on Brotzmann's art, although the two are very much interwoven in the latter part of the book. Rouy's questions are careful and Brotzmann is direct in his answers, which provide insight into what shaped him musically, as well as his better and worse relationships with fellow musicians. It touches on his family, his frustrations and what has ultimately created the complex free player of today.

The book has many surprises and Brotzmann is open and refreshingly blunt on occasion. His words explain what it was like for a young German musician emerging onto the scene post WW11 and how the discordance of the world at the time encouraged many players to turn to free jazz. It also helps explain how European jazz developed along different pathways compared to the American free jazz scene. Brotzmann discusses his love of blues, his despair at the establishment and how different funding policies in different countries affect the development of music, often stifling it to the point where musicians, in order to continue playing, take up residence elsewhere. He talks of the difficulties playing with some musicians and his deep respect and life-long relationships with many of them. Brotzmann discusses the self-doubts that have, at times, caused him to pause and reflect and also his short lived dependence on alcohol and how he dealt with that. He is also aware of how lucky he has been to be able to play his way and he feels blessed by the musicians he has found himself playing alongside. He freely admits that younger players coming to the jazz circuit may not find the road to playing regularly easy.
Art is part of Brotzmann's life which is still very important for him to maintain and develop. He loves collecting old bits and pieces to create something new, and making connections. He has a compelling desire to communicate through art as well as music. Time out is important too. Brotzmann is clear on the importance of doing other things away from music and art. Throughout this book there is an honesty to Brotzmann's answers—from the heart rather than giving glib or expected responses. Surprisingly, he is as understanding of those who do not appreciate free jazz as he is about those who support it. Brotzmann shows little self-importance in his views—he reminds the reader not to take anyone too seriously and comments on his foibles, like a growing eclectic musical instrument collection, his delight at finding gems in second hand shops. His dreams, he says, are sometimes foolish. Brotzmann's view of Utopia surfaces regularly—his ideas of community —that working with musicians can be likened to what might work in a society—each with a role, a job and input, each as important as the next, yet with natural leaders and followers. The overall message is that he does not believe his music has changed the world, but he has made a damn good start!