Andre Previn: We Got It Good And That Ain't Bad 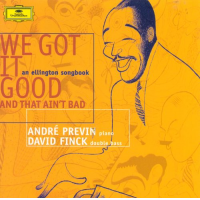 We haven’t heard much from André Previn lately, have we? I mean, those of us in the world of jazz enthusiasts. He has been writing operas, completing classical commissions and conducting orchestras around the world.

Well, Deutche Grammaphon, on whose label Previn records whatever his protean imagination produces (or so it seems), has corrected that omission. By staggering the release of “We Got It Good And That Ain’t Bad” by approximately a year after its recording in Tanglewood, the label has let Previn’s album of Ellington tunes stand on its own. Of course, it’s much better to let Previn’s album receive attention as a unique appreciation of the fellow master’s work, instead of being buried in the pack of releases that clogged the distribution channels in Ellington’s centennial year. Lest we forget, Previn got his start as a jazz pianist and movie orchestrator in Los Angeles when his Jewish parents fled Europe as World War Two started. As a result, he got to accompany Charlie Parker, and Previn recorded later with Ella Fitzgerald. In the early sixties, Previn had a mini-hit with the jazz trio version of “Like Young.” Even though his classical talents established his reputation as a singular conductor, composer and director, Previn never lost his interest in jazz.

It took the quality of Ellington’s compositions to bring Previn back to jazz recording again.

Previn seems to appreciate the secrets behind Ellington’s talent and success: the devotion to his band, the use of royalties to sustain it, and the supremacy of the music over the lyrics.

Previn seems to have chosen the tunes for the album for their melodic appeal. He reveals even those that are played less frequently, and thus haven’t become standards, as gems that allow for musicians’ personalization. My favorite, though, (which isn’t included on the album) is “C Jam Blues”—so spare and so suggestive for infinite improvisation. But listen to Johnny Hodges’ “Squatty Roo” or Ellington’s “Serenade To Sweden”. Retaining his earlier clearly conceived style of solo construction, Previn leads “Serenade To Sweden” into rolling tremolos and full-keyboard runs. “Take The ‘A’ Train” proceeds as a jazz waltz with only one chorus of melody leading into Previn’s improvisations, which evolve into a straight four romp.

Bassist David Finck is no stranger to piano accompaniment, he being one third of Steve Kuhn’s standard trio which continues to release, it seems, a CD a year on Reservoir.

While Previn and Finck provide the aural delights, even the production values of the liner notes contribute to the total package. While the inside of the case shows a classic Al Hirschfeld drawing of Ellington among his New York contemporaries, the cover of the liner notes shows an even more classic drawing: Hirschfeld’s rendering of Ellington’s smiling face, shaded on its left side, as it dissolves through increasing lack of detail to show Ellington’s abstracted hands over the keyboard. It’s too bad a similar caricature of Previn, as individualistic as Ellington in creativity and appearance, can never be drawn.

Title: We Got It Good And That Ain't Bad | Year Released: 2000 | Record Label: Deutsche Grammophon