By ROGER FARBEY
September 15, 2016
Sign in to view read count 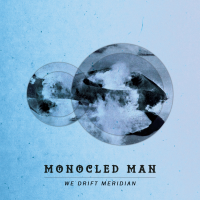 Formed in 2011 and led by Loop Collective trumpeter Rory Simmons this is the intriguing follow-up to Monocled Man's 2014 debut album Southern Drawl. The album's title reflects Simmons's intention to tell the story, via his compositions, of real people who lived on remote islands across the globe. Tromelin Island was the site of the wreckage of a slave ship run aground in 1761. The plaintive echoey trumpet melody at the opening of "Tromelin" reflects the loneliness and desperation of the seven surviving slaves who lived on sea birds and barrels of water. Despite the absence of a conventional bass instrument, the music on this track is cohesive and engaging.

The title track, featuring Swedish/Slovenian Emilia Mårtensson (voted Vocalist of the Year at the UK's Parliamentary Jazz Awards 2016) juxtaposes spacey sounds, clanging guitar and trumpet with Martensson's fragile vocals. "Marie Betsy" (Marie-Betsy Rasmussen, the first female to live in the Antarctic) encapsulates all that is exciting about this band, with tricksy drumming and trumpet and guitar vying for attention.

"Deception Island" goes a stage further, Ed Begley's melodramatic vocals are central to the piece which veers at times towards a dynamic, angular Polar Bear sound. "Fiction Afloat" features the two singers together and works very well with an underlying ambient tape loop and moody trumpet. The spoken intro to "Queen Tirza" (Tirza was a captive of a despotic maniac whom she murdered whilst they were marooned on a island in the South Pacific) starts with spoken words redolent of the opening of "Speak To Me" from Pink Floyd's Dark Side Of The Moon but progresses into a dark piece with trumpet, at times double tracked, Jon Scott's drums maintaining a fervent pulsating beat. The reverberating, morose soundscapes continue with "Scott Moorman Adrift," telling the sad story of Scott Moorman, a teenager who drowned in the Pacific Ocean in the 1970s.

The overall effect of this intriguing album is one of sonic fascination, the pieces at times seem amorphous yet this talented trio consistently evinces coalescent, haunting music, which accurately reflects the bleakness of the inspirational subject matter.