Bebo Valdes and Frederico Britos: We Could Make Such Beautiful Music Together

By GEOFF MIRELOWITZ
June 1, 2007
Sign in to view read count 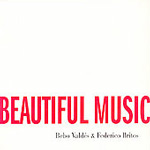 A more apt title would be hard to find for this intriguing piano/violin excursion into the music of the Americas. And the music could hardly be placed in more talented hands. Bebo Valdés is not only a giant of Cuban music, he is a giant of the jazz piano, period. Though perhaps not as widely known, Uruguayan violinist Frederico Britos has won Grammys for work with Charlie Haden and Israel "Cachao Lopez. His virtuoso performance on this album confirms he richly deserves his place in such company.

This is music of the Americas broadly conceived. Selections range from the title track to several American Song Book pieces to compositions by Tom Jobim, Astor Piazzola, Ernesto Lecuona and Chucho Valdés. The duo also offers a gorgeous rendition of Bill Evans' "Waltz For Debbie and a rarely heard Juan Tizol piece, "Bakiff." For good measure the Catalan composer Frederic Mompou is represented by the lovely "Canción. The Britos composition, "Together, closes the disc.

Valdés and Britos move effortlessly back and forth among these different genres, infusing each song with their distinct sensibilities. It is the art of the ballad writ large. Britos displays an exquisite tone on the violin. Valdés, whether soloing or comping behind Britos, matches that virtuosity and demonstrates a sense of touch on the piano keys that brings Evans to mind more than once.

Valdés' reputation stems in large part from his work as a band leader decades ago in Cuba. In recent years he has released several well-received recordings. We Could Make Such Beautiful Music Together is further evidence that he can still make extraordinarily beautiful music. Together, he and Britos could—and have.

We Could Make Such Beautiful Music Together; Bakiff; My One And Only Love; La Rosita; Noche Azul; Someone to Watch Over Me; Claudia; I Only Have Eyes For You; Adios Nonino; The Way You Look Tonight; Luiza; Waltz For Debbie; Cancion; Together.