Alex Lopez: We Can Take This Boat

By DAN BILAWSKY
December 27, 2011
Sign in to view read count 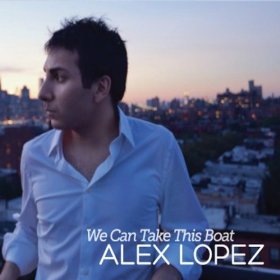 While We Can Take This Boat is the debut from New York-based tenor saxophonist Alex Lopez, he's no unseasoned novice. Lopez studied with saxophonists George Garzone, Jerry Bergonzi, and Bob Mintzer, obtained his Bachelor of Music degree at the University of Miami and his Masters at the Manhattan School of Music, and managed to turn some heads with his playing on percussionist Bobby Sanabria's Tito Puente Masterworks Live!!! (Jazzheads, 2011). Lopez can also be found bringing improvisational elements and unique angles into the world of video game music in a band he cofounded with drummer Norman Edwards, who also received rave reviews for his work on the Puente project, but his own compositions are the focal point here.

Lopez presents eight original numbers that move from pensive and thought-provoking to pounding and energetic, but he has some help along the way. Edwards is responsible for the major sea changes in dynamics, using cymbal explosions to change the overall topography of the music in many places along the way, but his ability to serve the song with grooves is never in question. He provides subtle shifts in feel, moving from swing to Latin and beyond ("Rejected"), lightly coats the music with gentle cymbal work ("Sleep Like A Starfish"), and provides some slamming beats when the mood suits him. Pianist Sam Harris proves to be another key ingredient in the mix, as he weaves dreamy lines into the fabric of a song ("Curtains"), delivers off-kilter solo work built on brilliantly seesawing lines and oddly staggered differences between his two hands ("Remember When"), and provides simple block chords ("Trying To Start Over") with equal skill.

While Lopez's music can be calm or turbulent, depending on the moment, his clean-toned approach to the horn is ideally suited for the softer side of things. In this respect, guitarist Greg Duncan proves to be the perfect partner for Lopez, as both men blend well when moving in tandem through heads, and maintain a simpatico sonic approach. In contrast, guitarist Sean Richey delivers a bit more bite on his lone appearance ("Trying To Start Over"), which closes out the album with a bang. The final piece of the ensemble comes in the form of bassist Linda May Han Oh, who proves to be the date's unsung hero. Her buoyant lines help lift the music to new heights and, while it would have been nice to hear her as a prominent solo voice, she's never short of superb as a supporting player.

The fascinating, dovetailing lines that introduce the odd-metered "Self-Fulfilling Prophecy," the shifts in feel on "Rejected, "and the intimate interplay and quietude on the lone piano-bass-saxophone trio of "End Of A Dream" show a musician/composer willing to explore a variety of avenues, and these performances prove to be the standouts. Lopez's journey is just beginning, but We Can Take This Boat is evidence that the journey will be worth following.

Rejected; Sleep Like A Starfish; We Can Take This Boat; Curtains; Remember When; End Of A Dream; Self-Fulfilling Prophecy; Trying To Start Over.

Title: We Can Take This Boat | Year Released: 2011 | Record Label: Self Produced