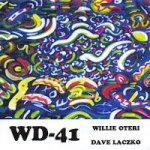 The conceptual, avant-garde mode of electronics-based implementations receives a slender uplift, thanks to guitarist and effects maestro Willie Oteri's collaboration with trumpeter Dave Laczko. This 2009, download-only, release is a spacey trip; chock full of loops, streaming synth noises, and fractured sojourns into the cosmic void.

Oteri's résumé includes collaborations with latter-day King Crimson musicians and former Frank Zappa hired guns, among other notables. In light of this, he's obviously well-seasoned in the progressive rock realm, amid the more experimental persuasions, driven home by the output of this effort. Essentially, the duo portrays a stark no-man's land via oscillating treatments, brimming with Oteri's odd-voicings and howling lines, while Laczko's resonating notes provide gobs of depth and airy environs.

The musicians fuse maniacal psychedelia with free-form improvisation. Oteri makes his guitar weep in concert with otherworldly implementations, where at times, it's difficult to discern from where the contrasting sounds are emanating. On "G-9," the guitarist dishes out a rhythmically framed lower register ostinato pattern in support of the trumpeter's soaring choruses and bizarre phrasings.

The artists transmit a dark and ethereal set of circumstances, while having some notable fun during the process. It's a synthetic soundscape of aural colors that prods the mind's eye—stranger than fiction, some might say.