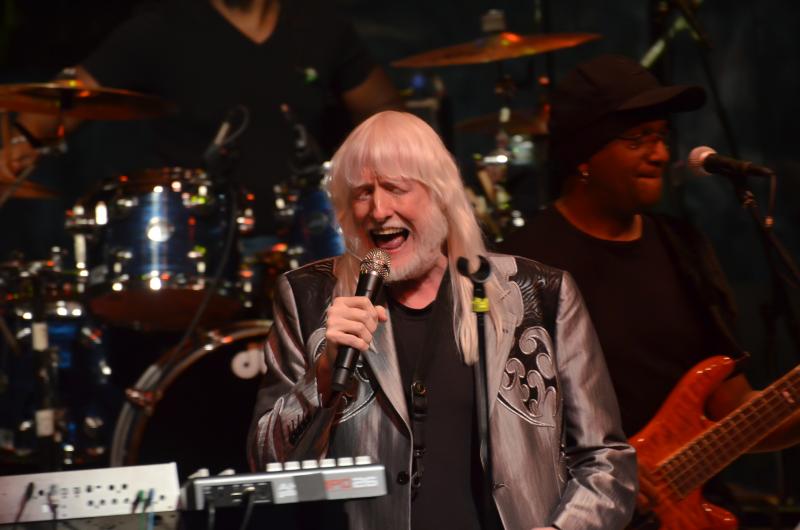 Blues-rock guitar virtuoso Johnny Winter passed away in St. Gallen, Switzerland on July 16, 2014 at the age of 70. The music world lost the man who, in 2003, was ranked by Rolling Stone as the 63rd greatest guitarist of all time. The guitarist was also multi-instrumentalist, a great singer an award winning producer and a member if the Blues Foundation Hall of Fame. His last CD, Step Back (Megaforce, 2014) is scheduled to be released posthumously on September 2,2014.

The Rock 'n' Brews Fest, also known as the Rock 'n' Blues Fest, (the third annual version of the tour) scheduled for the NYCB Theatre at Westbury on Friday, August 1, 2014 was originally slated to be headlined by Johnny Winter. Instead, it became a tribute in his honor. The show featured his brother Edgar Winter, Vanilla Fudge, Peter Rivera of Rare Earth and Savoy Brown's Kim Simmonds.

The night's festivities began with an introduction by local WBAB disc jockey Fingers who waxed poetic about Winter, his music and the bands that would be gracing the stage at the intimate Long Island amphitheatre. Bound together by both an era and the love of a musical genre, the middle-aged audience cheered the DJ's words and Winter's memory. The four late '60s/early '70s bands were also grouped together by the era during which they achieved their greatest success and by the music that they created—a rock 'n' roll that was directly influenced by the blues.

British blues-rock band Savoy Brown was formed by guitarist Kim Simmonds in 1965, in Battersea, South West London. The original lineup included singer Bryce Portius, keyboardist Trevor Jeavons, bassist Ray Chappell, drummer Leo Manning and harmonica player John O'Leary. Over the years there have been multiple line-up changes. A roll call of former band members reads like a Who's Who of British rock. "Lonesome" Dave Peverett and Roger Earl (who would together form Foghat), Hughie Flint (from John Mayall's Bluesbreakers) and Bill Bruford (who gained fame as a member of Yes) all were members of the band. Over the years, only Simmonds has stayed with the group since the beginning. On this evening, Simmonds, sans Savoy Brown (with Coco Powell on bass, Doug Rappaport on guitar and Jason Carpenter on drums filling in quite capably) led off the all-star extravaganza with a strong set highlighted by the bouncy "Nuthin' Like The Blues" from Goin' To The Delta (Ruf Records, 2014) and "Poor Girl" (on which he played both harp and guitar) from Savoy Brown's Looking In album (Decca, 1970).

For those who are unaware, Rare Earth was Motown Records' first big hit-making act consisting of only caucasian members. Originally called the Sunliners when it was formed in 1960, Rare Earth came into being in 1968. After recording an unsuccessful debut album, Dream/Answers for Verve Records in 1968, the group was signed to Motown in 1969. Peter Rivera was the band's original drummer and was the lead singer five Top 10 hit singles. During his time in the band, Rare Earth sold over twenty-five million records. Rivera began his set by announcing, "We played here 41 years ago." As the crowd cheered in approval, his backing band which also featured Powell, Carpenter (who was now manning the keyboards) and Rappaport, eased into "Hey, Big Brother." "I'm Losing You" followed. Rivera was in a great mood (and in fine form behind the skins). He introduced what was arguably Rare Earth's biggest hit "Get Ready (Cause Here I Come)" by stating that it was "the first record I ever sang. This song was like 21 minutes long." He then counted down, "1,2,7,12,14!" and the band was off. The set ended with and extended version of "I Just Want To Celebrate" from One World (Rare Earth/Motown, 1971). The song wrapped-up with an extended coda that featured the audience clapping and singing-along with Rivera.

In 1966, Mark Stein (vocals/organ), bassist/vocalist Tim Bogert, Vince Martell (lead guitar/vocals), and drummer/vocalist Carmine Appice formed Vanilla Fudge. Between 1966 and 1969 the band recorded five albums and became known for its psychedelic, bluesy brand of rock 'n' roll. Following the release of 1969's Rock & Roll (Atco Records), Vanilla Fudge played a number of farewell concerts and disbanded. Over the years Vanilla Fudge would reunite and disband a number of times (with a varying line-up of players). The band reunited in 1984 and released Mystery (Atco Records). In 2002, it released The Return (WorldSound Records) without Stein. Out Through The In Door, a CD of Led Zeppelin covers, featured the return of Stein and was released by Escapi Music in 2007. Bogert left the band in 2011. On this evening Vanilla Fudge consisted of original members Stein, Appice and Martel with Powell handling the bass. Its set opened with "Take Me For A Little While" from the self-titled debut album (Atco Records, 1967). The Curtis Mayfield cover "People Get Ready" (which was dedicated to Johnny Winter and featured Appice on lead vocals) followed. "Shotgun" was introduced with "Are You ready to rock? This is a song we did on the Ed Sullivan Show!" and featured Martel on vocals as well as a tasty drum solo provided by Appice. Prior to the band's patented heavy, psychedelic version of "You Keep Me Hanging On," Appice (who also sang lead on the tune) remarked that the band had been "together for 47 years." At the end of the song, the appreciative Westbury audience cheered and gave the band a standing ovation. Appice, Stein and Martell announced that during the intermission they'd be at the merchandise stand and that the audience members should feel free to come by and say hello. During the fifteen minutes prior to Edgar Winter taking the stage, the crowd engaged in quite a bit of retail therapy purchasing festival t-shirts/caps, Vanilla Fudge t-shirt/CDs/drumheads as well as music by Simmons and Rivera.

Edgar Winter is more than just Johnny Winter's younger brother. He is a keyboardist, saxophonist and percussionist and vocalist. He first entered the national spotlight with his early recording of "Tobacco Road," featured on his 1970 debut album, EntranceRoadwork, 1972's They Only Come Out at Night, 1974's Shock Treatment have all been certified gold or platinum by the RIAA) with his band, The Edgar Winter Group. In 1973, his single "Frankenstein" reached #1 on the Billboard Hot 100. When Edgar Winter appeared on the stage, he was backed by Powell on bass, Rappaport on guitar and Carpenter on drums. After opening with a rousing boogie-woogie version of "Johnny B. Goode," Winter addressed the crowd. He said, "I want to let you know how grateful I am to you all for being so wonderful in helping me get through this time...I'd like to dedicate this one to my brother. It's from the Roadword album ( Epic Records, 1972) and it's called 'Tobacco Road.'" The song featured call and response mimicking as Winter scat singing was intertwined with Rappaport's guitarwork. This was followed by a similar interplay with Powel on the bass. The set was chock-full of hits. Winter introduced "Frankenstein" by asking, "Are you ready for the monster?" He then stated that, "The first time I came out on stage with my brother's band, the crowd took a double take and said, 'wow, there's two of 'em.'" He further explained that he had been noodling around with the famous riff for a while before unveiling it for the first time with his brother's band. The performance of the song featured Winter on strap-on keyboards, on saxophone and on tom toms (during which he synchronized his break/fill with Carpenter's breaks and drum rolls).

It's been said that in the '60s and '70s, Johnny Winter brought his very own special energy, insight and musical acumen to iconic songs like "Highway 61 Revisited," "Johnny B. Goode" and "Jumpin' Jack Flash." This fact was not lost on his brother. Having already opened his show with the timeless Chuck Berry tune, Winter brought Kim Simmonds out on stage for what he called "a few of Johnny's favorite numbers." With that the band, Winter and Simmonds delivered and electrifying, bluesy version of the Bob Dylan classic. As the song wound down, Winter was joined on stage by each and every one of the evening's performers—all of whom were ready to jam. As the opening notes of "Jumpin' Jack Flash" rang throughout the venue, the lanky Winter then came center stage and imply stated, "Johnny loved the Stones." Carmine Appice urged the crowd to stand by raising his drum sticks and motioning for them to rise (much like a pastor would). The all-star band's breathtaking take on one of the bluesiest Jagger/Richards compositions was a sight to behold. With numerous vocalists (including Winter, Appice, Rivera and Martel) leading the way, the dueling guitar riffs supplied by Rappaport, Simmonds and Martel, Winter's works on keys, Powell's thumping bass and Carpenter's driving backbeat, made an ageless song, for this crowd, unforgettable. When the song came to an end, this outstand group of players joined arms and took a collective bow. The lights came up and as the audience members exited through the din, many were heard singing "I was born in a cross-fire hurricane" and "but it's alright now, in fact its a gas... jumpin' jack flash it's a gas, gas, gas."