At over 70 years of age, with a career that began in 1959 and included celebrated stints with Art Blakey and Miles Davis, 12 albums for Blue Note during that label's most creative period, the founding of one of the more influential fusion groups and work with major jazz and pop musicians throughout the '80s, it is easy to bandy about terms like "living legend when describing Wayne Shorter. His music is among the first that aspiring jazz musicians play in their education. His life and work has been the subject of a recent biography and a 2-CD retrospective. He plays festivals from Australia to New York's Carnegie Hall. The simplest thing to do with Wayne Shorter is reside in what he calls "glittering generalities and not think about him in terms as challenging as his career.

"What's needed is the experience in dealing outside of the safe zones of life, he insists. "Safe places, safe havens, places of all familiarity where you can only relate to this or that, this whole outreach, crossing artificial borders, barriers and all that, the vastness of life itself, the endlessness of it, throwing off the neighborhood mentality of things when it's done... We're not enjoying the grandiosness of being this and that. There's a mission and you and I both know that not a lot of people are hip to taking chances.

Today's Wayne Shorter has been described as being in the middle of a resurgence. The saxophonist returned to the acoustic roots that made him a beloved artist and continues to apply his wondrous compositional intellect to a whole new set of music. What do fans of Blakey think of today's Shorter? Are Weather Report listeners left wondering if he will pick up fusion again? Do the new albums compare to seminal discs like Speak No Evil and Juju? Shorter responds to these questions, and more importantly the answers to them that others have provided, with an uncharacteristically pithy comment: "I think it's a sound bite. He continues to elucidate but ends up making the issue more complicated. "It's a way of, that process, the act of describing the familiar is the easiest thing to say. You don't see Marlon Brando for a little bit, he makes a movie, 'Oh! The Comeback or Resurgence.' But what you don't say is really it's a continuation, especially when you have people who fight for the creative process, I don't mean fight in a violent way but they stick to their guns, they don't veer off the path. Whether you support the claim that Shorter has rediscovered himself and is doing his best work since the '60s is immaterial. To compare his current band to arguably his most well known affiliation - Miles Davis' unmatched second quintet - is to take a road he wants no part of. "That doesn't make any impact but a sound bite; keeps the thought in the same place, Shorter says. "I hear a lot of 'Sounds like the days when we were with Miles', to me that kind of observation is not creative. We all have an obligation to be as creative as we can be because I think it's a matter of survival.

Shorter has survived better than most in a music and a creative form that has claimed more and more victims with less and less to show for it. Asked if he was against playing club dates, Shorter becomes introspective: "The jazz club scene...we've done that as young people and that's a young man's hang. The nightclub scene, another set, another set, another set, we've done five sets a night on weekends in places like Chicago, matinees and all that. The nightclub scene was one of the scenes that was conducive to people going astray and a lot of people being not here. I'm not blaming the scene, each individual is supposed to be in charge of their destiny, but a lot of people don't know that. But that's why people like Miles and Weather Report and Chick Corea, we all said 'hey, we could do a lot with more people and do a better presentation with more rest as we get older.' You can wear yourself out in a nightclub plus it is a way of being kept at bay, targeted by, I call them 'the gatekeepers of the world'.

But unlike many players who have settled comfortably into "elder statesman status and the "festival circuit , Shorter challenges himself and his band regardless of the scale of the performance. "I'm not saying that environment determines how we play, he insists. "If we were playing at a nightclub, we'd be playing the same way. In other words, in a nightclub we would be actually doing the thing 'life goes on'. The unexpected happens anytime, anyplace and I think today is a time when dealing with the unexpected in ways of wisdom, this is a new classroom of life. This stage of life, this adventure, this eternal adventure of life, another classroom.

Speaking more of his band, the accomplished group of pianist Danilo Perez, bassist John Patitucci and drummer Brian Blade, Shorter is laudatory: "These guys are doing things...they don't worry about putting your best foot forward when guests come over the house. You cover your musical foundation; you don't want anyone to say anything about your musical foundation, weakness or anything like that. These guys make themselves vulnerable, because we know that music is the second important thing and we want to try to put the humanity thing first. You know, 'Out-Reach'. We want to stimulate this whole process of 'Will Somebody Please Stand Up and Think for Themselves!' or 'Think-Feel'. I call it 'Think-Feel'. It's okay to think-feel for yourself... We'll play anything that comes to us because we know that the dots have always been connected but artificially man has a history of disconnecting the dots.

For those who have heard Shorter in any circumstance, the idea of connecting dots must have a particular resonance. His lines are filled with wondrous gaps and spaces giving the impression he is hearing notes and sounds and textures he chooses not to articulate. "That's something we used to talk about when we were with Miles, he recounts. "Miles would say 'when you're not playing, when the music is going on and someone doesn't play during a piece or expression that's going on, that gives shape and purpose and all that to the whole entity of that moment, the essence of that moment.'

Asked why he has begun to play more soprano live, Shorter responds with the only grounded statement of the conversation: "Tenor has a way getting ground in the middle registers of the other instruments, unless you have the kind of equipment on stage that makes you sound like a record. Everything is so separated and mixed and everything that the instant you play the audience can hear the tenor like its standing right in front of you. Hear every instrument clear, separated. That takes a lot of money to have that kind of equipment. On record, a lot of tenor players are heard well on records historically and not as well in public because the register, the left hand of the pianist, the bass and overtones of the bass drum and all that soak up the middle register of the tenor saxophone. 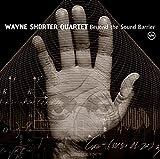 The talk soon veers off again when asked the weighty, and given everything we've learned about Shorter, unnecessary, question of what expectations he places on himself. He mulls it over and places the answer within the context of spiritual mathematics. "I figure like if it's possible to be everywhere...I have a song...called 'Adventures Aboard the Golden Mean'. I was looking up that word 'Golden Mean' and the thing that struck me after columns and columns of explicatives, I saw one that struck me that said 'A place where there are no attachments to any extremes.' And some people I know think philosophically that the Golden Mean means the Middle Way and what I'm getting from this is not even attached to itself, the middle way, something called the middle way. Liberal, rightwing, no extreme. But the Golden Mean is a challenge to get to, it's not a place but it's a challenge to be free of all extremes and that was what jazz was supposed to be, like the little bee that goes around and pollinates, unknowingly sometimes pollinates, or when they say 'all music influences each other'...you could say that the Golden Mean is like a tinkerbell that flies around and touches all the other so-called categories and reminds them to be free. Reminds the people to be free because of 'et-er-ni-ty' and that's where the adventure is, the process of living, the eternal process has to be an adventure.