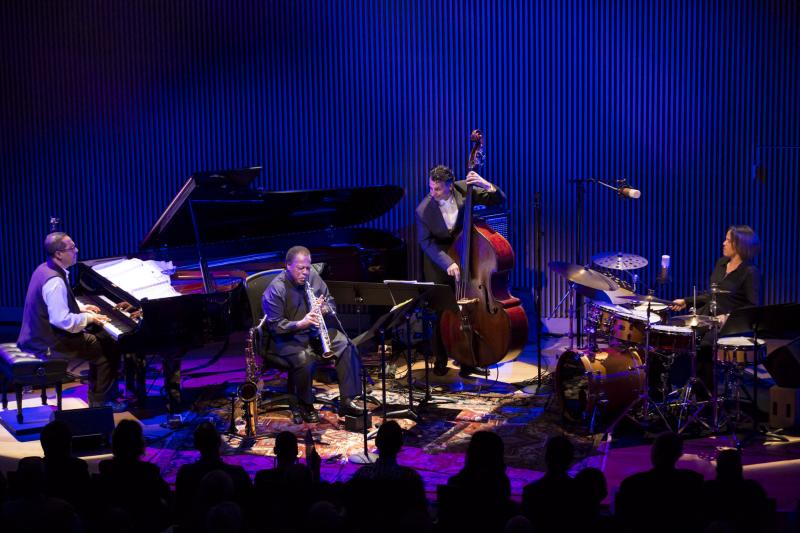 To jazz fans Wayne Shorter needs no introduction. That evening, the first of a three-night stand at SFJAZZ, Director Randall Kline referred to him as "possibly the greatest composer in jazz" which is not an overstatement. For Shorter, who was lured from Art Blakey's group by Miles Davis, earned his reputation by burnishing gems such as "E.S.P.," "Footprints," "Sanctuary," "Nefertiti and "Prince of Darkness," for Davis before going on to co-found (along with Miroslav Vitous and the late Joe Zawinul) the phenomenally successful and groundbreaking group Weather Report.

Originally strictly a tenor saxophonist, he began playing soprano saxophone as well beginning with the seminal Miles Davis recording In a Silent Way (Columbia, 1969). Now 83, he has received countless awards (such as ten Grammies), and it was a rare treat to see Shorter in concert.

The set's tone, with its extended numbers and cornucopia of sublime improvisation, brought to mind, at times, reminiscences of a Davis-era sound. Setting the foundation for this sonic synchronicity was the fact that Panamanian pianist Danilo Pérez and bassist John Patitucci have collaborated with Shorter since 2000. The band played classics such as "Orbit" (which Patitucci and Perez recorded on Shorter's Alegría (Verve, 2003) and subsequent Without a Net (Blue Note, 2013), but which first appeared on Davis' 1967 Columbia date, Miles Smiles), "Lotus," "Lost" and the folksong "She Moved Through the Fair" (also from Alegría), as well as the more recent "Prometheus Unbound."

Clad entirely in black, Shorter remained seated while playing both his tenor and soprano saxophones. Longtime collaborator Terri Lyne Carrington played with her fingers before switching to brushes. Shorter steered the ship with a strong solo. Another number featured interplay between the four instrumentalists. Layered textures backed Shorter's lyrical and sometimes pensive tenor. Shorter later added a soprano to the mix while Carrington switched to mallets. Throughout, Carrington generally exercised a heavy hand while maintaining the beat (and added tone, at times, with bells). Patitucci bowed his bass as well as plucked; Pérez added sonic counterpoints on the 88s. Shorter played some lovely solos on soprano and tenor, sometimes switching between the two during the same number.

Following tremendous applause and a standing ovation, the band reconvened with a concise yet captivating version of "Adventures Before The Golden Mean."