By MIKE JURKOVIC
February 16, 2018
Sign in to view read count 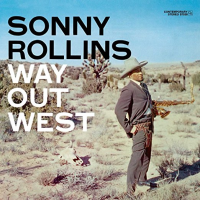 In crisp, fly-on-the-wall audiophile quality, Craft Recordings celebrates the 60th anniversary of Sonny Rollins Way Out West with a deluxe packaged 2LP set, featuring four previously unreleased (a sharper toned "There Is No Greater Love" and Take 1 of the title track are fine listens) as well as three alternate takes, new historically rich and contemporaneous liner notes by jazz scholar and radio host Neil Tesser and rare photos from the iconic lens of William Claxton.

Though he had worked with Thelonious Monk and Red Garland, Rollins just couldn't settle on a pianist that would leave him the adequate space he felt his horn needed to express all the ideas running around his head (he called it strolling.) So it was at three o'clock AM on March 7 of '57 at Contemporary Studio in LA, that Rollins, along with the ever pliable and reliable bassist Ray Brown and drummer Shelly Manne providing effortlessly minimalist rhythm that Rollins set out on his first trio minus piano experiment, an experiment that would have landmark future results with explosive A Night At The Village Vanguard. Consistently hitting peak improvisation on such loopy, unexpected material as "I'm An Old Cowhand" and "Wagon Wheels" is what marks this disc as iconic. That and the and way too cool cover of the sax colossus himself amongst the cactus and tumbling tumbleweeds in cowboy threads brandishing his killer horn.