Bobby Selvaggio: Way Of Being 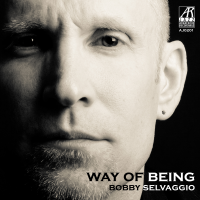 Bobby Selvaggio's Way Of Being epitomizes a restless sound, one that belies the alto saxophonist's unflappable nature. His latest release builds upon the groove-heavy folk/pop/funk sound of Grass Roots Movement (Arabesque, 2011).

This disc, his seventh as a leader, is split evenly between the electric Grass Roots Movement quartet and an acoustic Shake Trio. Both groups sizzle with the saxophonist's ultra-nimble and penetrating sound. The veteran of Joe Lovano's band and the Vanguard Jazz Orchestra, Selvaggio's music is a kind of urban folk music that straddles many worlds, but whose vernacular is unmistakably jazz.

His electric band finds the return of drummer James Johnson III and bassist Kip Reed, but sitting in on electric guitar here is Chris Parker. He is Selvaggio's confederate, pacing, sometime striding lock-step with the saxophonist on tunes, like the aptly named and funky "Shake" and "Zombie Apocalypse." Selvaggio shares the spotlight, granting Parker a generous platform for his solos. The electrified approach neither detracts from Selvaggio's quicksilver playing nor the musicianship of the band. Covering Sting's "Every Little Thing She Does Is Magic," a familiar pop tune, is the jumping off point for Selvaggio's high wire (or perhaps high-wired) act. Likewise, Stevie Wonder's "Higher Ground" hasn't been covered with this much ferocity since The Red Hot Chili Peppers did so in 1989.

Unplugged, his trio loses none of the electricity. Bassist Ashley Summers holds down a hearty groove on the showcase tune "Flow," while Selvaggio applies his signature alto sound, one that delivers notes with expeditious smarts and nary a misplaced sound. The slow groove of "Revolution" gives way to the ferocity of drummer Chris Baker on "Sonic Fence."