By DAN MCCLENAGHAN
October 3, 2013
Sign in to view read count 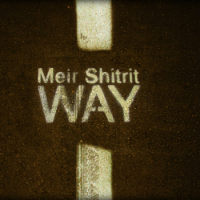 Isreali-born and now San Diego-based guitarist Meir Shitrit's Way sounds like a recording that guitarist Bill Frisell might have made, had he been born and raised in Israel. Frisell's often mulit-layered sets are, more often than not, a celebration of Americana—though certainly there are tangents and hybridizations in the discography. Meir's debut is a well-crafted, multi-ethnic hybrid centered mostly on his Middle Eastern roots, featuring his virtuosic work on guitars, bouzouki, saz, bass, and lap steel guitar. Throw into the mix his superior acumen in programming, production, and songwriting.

Way is a set of Shitrit's originals, opening with "Shepherd's Melody," featuring Indian percussion, and initially, an Eastern drone before the tune evolves into a lighter, bouncier mode. The low-in-the-mix vocals give sound an exotic vibe, simultaneously both ancient and modern. "Blue" is a somewhat sparer tune, forthrightly pretty, pastoral and American-sounding with the addition of harmonica.

A virtuosic instrumentalist, Shitrit is even more impressive—on his debut, at that—with the production. His songs are multi-layered, with multiple harmonies floating behind simple melodies, with instruments that include the Jew's harp, violins, flutes, saxophones, and smooth, usually wordless vocals, and astute and subtle programming textures bolsterig his own arsenal of string instruments.

"Playin' Around" pulls the music into a groove, fun and playful; and "Noise" ups that groove ante, with an infectious modern dance beat. Then "Down Town" pushes that theme even deeper, with a rock steady beat and wah-wah guitar.

Like guitarists Daniel Lanois and Bill Frisell, Meir Shitrit is a studio wizard, weaving acoustic sounds together and juicing them with programming with a fine touch on his auspicious debut, Way