Way Down In Louisiana 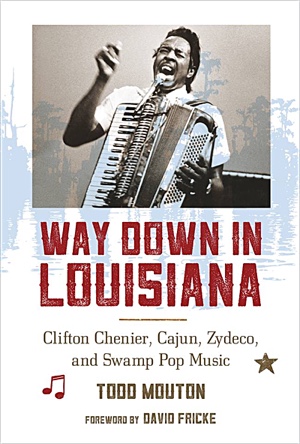 Of all the states which comprise America, Louisiana is one of the most diverse when it comes to acculturation, specifically when applied to music. With the convergence of Spanish, French, and African settlers in an area already populated by indigenous people, a new regional identity through the process of creolization, was established. Acadiana, the region west of New Orleans, is the homeland of the Cajuns, and the source of a vibrant musical heritage which continues to thrive. Todd Mouton delved into his native habitat to research contemporary Cajun music on Way Down In Louisiana, but he went even further, probing deep into the hybrid of zydeco and its foremost artist, accordion master Clifton Chenier.

Mouton sets an easy reading pace as he travels the expanse of Acadiana spotlighting the artists which continue to play music with strong local and cultural roots. The chapters are essentially individual articles, each one specifically dealing with the musicians covered, and a suggested playlist of available music is provided. The authentic Cajun bands featured are: BeauSoleil, with its prominent fiddle man Michael Doucet, who also went on to play in Coteau; Filé whose release "La Vie Marron," in 1996 caused quite a stir; and the inimitable Steve Riley & The Mamou Playboys, whose key members have gone on to be integrated into Lil' Band O' Gold, one of the most widely recognized Cajun bands ever.

There is an interesting approach on the Zachary Richard chapter, as it portrays a man in constant search of recognition for his culture amidst being a major artist in another country (Canada). The all-female group Bonsoir, Catin is brought to light as a versatile and talented ensemble whose reputation as dance hall veterans and recording artists is of the highest regard. Louisiana's favorite guitarist Sonny Landreth is given the royal treatment he deserves; Roddie Romero & The Hub City All-Stars bring regional flavors to their more urban sound, and Buckwheat Doral is the heir apparent in keeping the spirit of zydeco alive and well.

Which leads us to the main part of Mouton's book. Clifton Chenier took the African/Acadian influence of the music played by Creole accordionist Amédé Ardoin and fiddler Dennis McGee, blended it with the blues, and invented zydeco. Though this is a simplification of a complex art form, it serves to establish a source of reference. Chenier's trajectory from his rural roots near Opelousas, Louisiana to Carnegie Hall and his triumphant performance at the Montreux jazz Festival, is well documented by Mouton, as is Chenier's extensive recording production on a variety of labels. For all his contribution to modern music, Clifton Chenier, though recognized for his achievements, has never been written about. Mouton tells the tale with heartfelt interest, of a consummate performer, forever accompanied by his brother Cleveland on rubboard, who lived his life on the road, yet remained true to his people and his roots.

Way Down In Louisiana is written by an insider, revealing what is important in his world. Luckily, that world is the rich heritage of music spawned from the swampy terroir of Acadiana, and we are offered a personal insight on the inner workings of those musicians and bands which keep Cajun and Creole culture alive and well. And most important it is an invitation to go out and listen to the music.