By BRUCE LINDSAY
August 5, 2013
Sign in to view read count 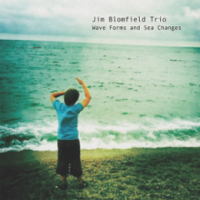 Wave Forms And Sea Changes is the Jim Blomfield Trio's debut, an acoustic piano trio from Bristol in the southwest of England. Pianist/composer Blomfield has been on the scene for some years. Bristol-based since 1991, he's worked with players such as Andy Hague, Kevin Figes and ECM recording artist Andy Sheppard. On this album he's joined by two younger players—bassist Roshan "Tosh" Wijetunge and drummer Mark Whitlam.

Southwest England's popular music scene has always thrown a few surprises at the unwary listener. In the '60s, it brought the mighty Troggs to the world. In the '70s, it was The Wurzels—an odd folk-meets-music hall band whose biggest hit was a song about a combine harvester using the music of Melanie Safka's "Brand New Key." Things picked up again after a few years, with The Pop Group and Massive Attack. In the 21st century, that creative and atmospheric strand has continued, thanks to bands like Get The Blessing. Wave Forms And Sea Changes carries on the tradition.

"Return Of The Easton Walk" is full of ideas, contrasts and exemplary musicianship. A spiky and percussive opening gives way to a flowing, gentle but oh-so-brief melody, before Blomfield returns to the edginess of the opening bars. Then the melody's back, the tension builds, and then... There's as much variety and invention in this one track as there are in many entire albums, yet never once does it sound overblown, or feel like Blomfield is engaging in some sort of ego-boosting "look at me" display. Wijetunge and Whitlam don't just leave it all to the pianist either; both men add some twists and turns of their own including some lovely arco bass from Wijetunge and what sound like body slaps from Whitlam. It's clear this is a trio with which to be reckoned.

"N Trance" picks up its predecessor's melodic strength and runs with it; another graceful tune emerges, albeit with a bit more pace. The remaining tunes move confidently between more engaging melodies and periods where rhythm takes center-stage. The melody of "Now And Zen" sounds like a close relative of Billy Joel's "Piano Man," while "Pier Pressure" is more trip-hop meets hard bop groover, Blomfield's piano in the opening and closing sections seemingly altered electronically to give it something of a Fender Rhodes feel. "Rum Thing" gives "Return Of The Easton Walk" a run for its money in terms of variety, with Whitlam and Wijetunge laying down yet more irresistible rhythms.

The brief and melancholy "Sea Changes" and "Impermanence" deserve mention, as does the Latin-flavored "Sail." All three point to a more reflective side of Blomfield's work, where harmonic exploration takes precedence over the creation of danceable grooves (although the groove eventually returns to the fore on "Sail"). All in all, impressive work from the three musicians. Wave Forms And Sea Changes is a fine addition to the roster of atmospheric, slightly idiosyncratic music from the increasingly impressive Bristol jazz scene.