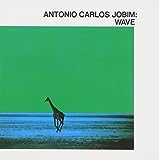 Antonio Carlos Jobim's music defined the bossa nova movement, and he was largely responsible for the last worldwide popular musical style that featured subtle melodies, literate texts, and sophisticated harmonies. During the late 60s and early 70s Jobim, along with producer Creed Taylor and arranger Claus Ogermann, produced several albums that rank among his finest. Wave is one of those masterworks.

Subtlety is the key element in this album. Although most of the songs are in the medium tempo bossa nova groove, they are all possessed of that deceptively relaxed style that is rhythmically self-assured and always swinging. If Count Basie had been Brazilian he would have undoubtedly been Antonio Carlos Jobim. Two songs from this album became immediate hits, the title tune "Wave" and "Triste." The other eight songs are among Jobim's less well known works but are certainly deserving of further performance. Urbie Green's beautiful trombone work is a significant presence on the album, especially in "Look to the Sky" and "Triste." One can also not say too much about Claus Ogermann's arrangements. His format of single-line piano melody with string acompaniment and flute or trombone countermelody became a much copied style in succeeding decades.

Unfortunately, only one cut from the album, "Lamento (No Morro)," features a Jobim vocal. While not a great singer, Jobim was, like Hoagy Carmichael and Johnny Mercer, a good singer of his own material. Wave is an important album by one of the most important composers of the 20th century. It is not to be missed.