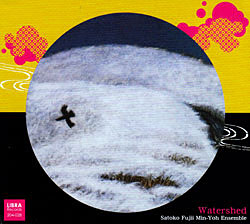 Min-Yoh is the newest star in pianist Satoko Fujii's growing constellation of amazing improvising groups. While the presence of her partner in music and life, virtuoso trumpeter Natsuki Tamura, is a given, Fujii's musical interactions with a seemingly endless array of top-drawer improvisers from all over the world are almost as intimate. The pair gives the sense that there are never any sidemen in their groups, only equal partners. Watershed is dedicated to the exploration of Japanese folk music in a 21st century jazz context; three tracks are arrangements of traditional Japanese melodies, while Fujii considers the remaining five to be "her own personal Min-Yoh."

After a brief display of eerily extended brass sounds, "The Thaw" has trombonist Curtis Hasselbring and Tamura duking it out impressively over Fujii's forceful piano and Andrea Parkins' long accordion tones. On "Whitewater," Hasselbring radically alters the timbre of his trombone with a mute, while Fujii gets odd mbira-like sonorities out of the piano. This leads to a dramatic release as both discard their sound-altering devices and Tamura and Parkins join in on a jaunty, bounding theme. Leaving no sonic possibilities unexplored, Fujii opens "Cascade" with bizarre inside-the-piano sounds. The meat of this piece is another spectacular double-duet improvisation, with Tamura blowing wild and free over the increasingly agitated Fujii. Essentially an improvised soundscape of extended brass sounds and alien effects from accordion and piano, "Limestone Cave"—the CD's most abstract piece— is interrupted by a brief composed passage in the middle, while the brief and lovely "Estuary" closes the CD out on a delicate, meditative note.

The quartet approaches the three traditional Min-Yoh with the same inquisitive and passionate spirit. "Hanagasa Ondo" is downright scary, with Hasselbring's uncanny growling and Fujii's plaintive vocal crying out amidst swirling accordion dissonances and animal-like yelps from Tamura. Perhaps because of Fujii's intensely rhythmic piano work, some of the group's most expressive playing—both ensemble and solo—takes place on a quite radical makeover of "Soran Bushi"—the subject of a prior and quite different jazz adaptation by tenor saxophonist Billy Harper. With Fujii's dark and turbulent piano leading the way, the familiar melody is compressed into a series of odd-metered phrases, but it's the traditional lullaby, "Takeda no Komoriuta," that gets the most unusual treatment. Already a rather haunting piece, the quartet slows the tempo further and Tamura plays the melody absolutely straight. From there, the piece slowly breaks down into a spooky, ballad-like collective improvisation.

As with all Fujii recordings, Watershed contains some very challenging and complex music, amidst quite a bit of beauty and wonder. The juxtaposition of traditional Japanese melodies and this quartet's unusual sensibilities—even by avant- garde jazz standards—may ensure that even some of Fujii's longtime fans are perplexed, or even confounded, by this music, yet, there's no denying the passion and virtuosity involved.