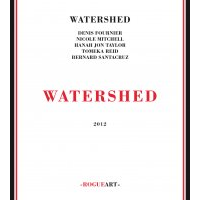 Flautist Nicole Mitchell has found a supportive outlet in the Paris-based Rogue Art imprint, with her past outings including Anaya (2009), Emerald Hills (2010), The Ethiopian Princess Meets The Tantric Priest (2012) and Arc Of O (2012), and she is the most well-known name on Watershed. However she sits second in the billing below French percussionist Denis Fournier / Nicole Mitchell who contributes three out of five originals on the 51-minute 2011 concert recording from Junas in southern France. A long-time aficionado of Chicago's Association for the Advancement of Creative Music, Fournier first made acquaintance with its members back in 1985 through Kahil El'Zabar's Ethnic Heritage Ensemble. Part of the band at that time was reedman Hanah Jon Taylor, invited by the drummer to join his band here, alongside Mitchell and fellow AACM initiate, cellist Tomeka Reid.

Fournier's admiration for the AACM's sense of collective endeavour manifests itself in the way his compositions offer such varied opportunities for expression by this crack unit. Taylor has flown largely below the critical radar, but proves a vital presence, soloing strongly and bolstering the ensembles. After the Frenchman's appropriately thoughtful introduction to "Dannie Richmond," Taylor wails convincingly on tenor saxophone, latterly in muscular duet with seething drums. Later on "La Voce de la Luna" he more than holds his own on flute in tandem with Mitchell, which is no mean achievement given her darting lines, embellished by vocalized trills and vibrato shadings. His work on electronic valve instrument convinces less, adding subtle and disconcerting hues at the outset of "Le Partage des Eaux" before becoming more anonymous as the track progresses.

On bass Bernard Santacruz, like the drummer, supplies sensitive though periodically challenging counterpoint. He shines at the start of Mitchell's episodic "Pathways" as he struts his stuff around a taut riff, leading into what is the most ambitious cut on the album. Dualling tenor and flute chafe at the bounds of normality, before opening into whistling unison over a scratchy backing. So much detail is packed in that the piece might have benefited from longer than its nine-minute span. Reid's warm supple tones mingle with the bassist in an edgy twosome at the outset of Fournier's concluding "La Voce de la Luna" heralding a martial processional which takes the disc out in an air of melancholy triumph. Though the geographic and economic realities might be difficult, there's enough here to justify this being more than a one-off project.