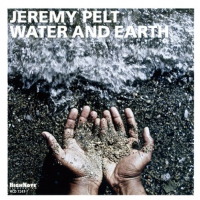 Change is often a precursor for innovation. After many years of straddling modern mainstream, and progressive jazz via his burgeoning solo career and first-call session duties, trumpeter Jeremy Pelt leans a few notches toward the jazz-fusion spectrum on Water and Earth. However, the artist doesn't take matters to the extreme and serves up a compellingly divergent track mix, owing patronage to bop and outlying areas of the jazz vernacular. Using trumpet effects in spots, including the dual keyboard attack of Frank LoCrasto and David Bryant, the album gels amid the artists' razor-sharp focus, robust exchanges, and variegated tonalities.