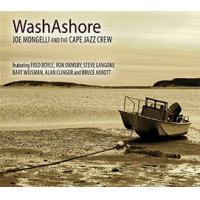 Joe Mongelli and the Cape Jazz Crew's new CD, WashAshore features well-known tunes with modern-day arrangement and trumpeter Mongelli and the Crew offer inspired playing. This is not just another standards album, but an imaginative and carefully crafted collection of arrangements that have already been tested in countless live performances. The group is full of interplay and since they perform regularly together, they have an added dimension that is garnered by years of significant audience support and praise from their live performances.

Striking out from Cape Cod, MA, Mongelli has created a remarkable album that simply swings and is perfect for easy-going listening. Backed by the Crew: Fred Boyle on piano, Ron Ormsby on bass and Steve Langone drums (except tracks 3, 4, 8), Bart Weisman on drums (tracks 4 & 8) and guest Alan Clinger on guitar (track 6). Mongelli lays out a series of ten tracks that capture the swingin' feeling of great jazz from the 50s. It's jazzy swing with the soul of the blues...in other words, the genuine swingin' article, not some pick-up band that just got together and called themselves a swing band. Mongelli knows his musical history and the Crew knows how to support and honor the tradition themselves. Which frankly adds up to an enjoyable experience of the traditional jazz idiom.

I could use fancy words to describe the band, but simply put -the band just swings, this is becoming a rare commodity in jazz widening breadth. The album is perfect for listening and the music feels good. "Doxy" is given a creative arrangement that captures the swingin' feeling of the late 1950s-early 60s. It's jazzy swing keeps the authentic journey on track. The tutti writing between Bruce Abbott on flute and Mongelli's muted trumpet is a nice addition to the sonic-scape. Mongelli's trumpet voice is supremely soulful and powerful, but he has just enough modern edge to really make his playing have its own identity.

WashAshore is a beautiful revision of classic standards by a band that swings with buoyant depth. Bringing a modern sound to the legendary jazz from the 50s, while still retaining a full of infectious swing throughout. Trumpet fans who haven't heard of Joe Mongelli are going to be in for a treat, he offers an authenticity to his sound that rings true from track to track, with a respect for the traditional swing signature sound.

I Got It Bad; When I Fall in Love; Alfie; Doxy; Watermelon Man; Beautiful Love; Bag’s Groove; Til There Was You; Makin’ Whoopie; Where or When /I Thought About You.