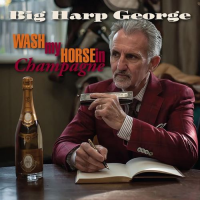 There is positive news on the blues front, as it continues to evolve and be held in high esteem by its faithful practitioners and audience. Already a generation removed from the heyday of legendary originators; there is a crop of players who have been keeping the blues flourishing, and contributing a renewed outlook to the idiom. Among those is Big Harp George (George Bisharat) whose instrument of choice is the chromatic harmonica, on which he offers an inventive take on 21st century West Coast Blues.

The odd title, Wash My Horse In Champagne, is derived from a true story of a Brazilian rubber baron who did just that, due to his immense wealth. Big Harp George incorporates this phrase, and twelve other original songs, into his sophomore release, following "Chromaticism" in 2014. The first record introduced his distinctive adaptation of the chromatic harp, and this one takes it a bit further, with a smooth, polished production. Recorded at Greaseland Studio in San Jose, it is another gem from the growing family of blues artist in the Bay Area.

The chromatic harmonica differs from the more popular diatonic by its obvious larger size, and the incorporation of a slide button which allows the player to cover a broader range of scales and notes. The diatonic is more recognized and popular, lending itself to "note bending," a characteristic nuance of the blues. George brings an acoustic jazz sound to his harp in the accompaniment role, as his songs primarily revolve around the vocals, with a great band backing him up.

Big Harp George will be the first to admit that his lyrics reflect personal experiences, set in tune to the blues. "Home Stretch," is a tongue-in-cheek look at changing lifestyles for those who have lived in the dangerous fast lane, as many musicians have. The agile guitar work of Kid Anderson is featured on "Road Kill," a song about being jilted; and a distinct Latin tempo highlights the title track, where guitarist Little Charly Baty performs convincing Brazilian intonations. The jiving jump blues inspires "Cool Mistake," bringing to mind Louis Jordan and his humorous, rollicking tunes, with corresponding choruses.

There is a midnight shade of Charles Brown in "My Bright Future," where pianist/producer Chris Burns establishes a serious piano foundation for the vocal and harp to lean on. "I Ain't the Judge Of You," is a pure west coast shuffle, and "If Only," has an underlying New Orleans cadence and vibe. The sax of Michael Peloquin, and trombone of Mike Rinta, are the bedrock arrangement of "Mojo Waltz," one of the discs stellar instrumentals, the other being "Size Matters," a short lesson on the tonal and pitch ranges of the chromatic harp.

With just sparse upright bass backing by Kid Anderson, "Justice In My Time," has the melancholic harp weaving around the vocals, a timeless account of a man pleading for a fair shake in life. The perfect finale for an interesting set, blues for the modern man, sung with realistic spirit. Big Harp George is to be commended for choosing this path in his creative journey. The sense of personal satisfaction revealed in this production speaks volumes for him, as well as the musicians in the sessions, who did a commendable job in maintaining the essence of the music intact, offering the blues a bright future.

Home Stretch; Road Kill; Wash My Horse In Champagne; Cool Mistake; My Bright Future; I Ain’t The Judge Of You; I Wasn’t Ready; If Only; Light From darkness; Mojo Waltz; What’s Big; Size Matters; Justice in My Time.