Trespass Trio: "...was there to illuminate the night sky..." 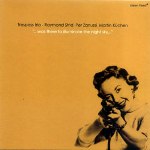 In the album notes to Trespass Trio's "...was there to illuminate the night sky...", saxophonist Chris Farr provides a colorful yet somewhat fragmented essay, regarding the evisceration of society, partly tied into the Iraq war and the everlasting Israel-Palestine conflict. He sets the stage for a life force panorama, iterated through the power of music that casts a dour or ominous state of affairs. Recorded in Norway, the Scandinavian trio exercises some bloodletting here.

The injustices of society in general are transmitted via Kÿchen's often gut-wrenching baritone and alto sax phrasings, topped off with a nicely articulated gruff tone and fluent craftsmanship that's supported by the rhythm section's blustery mode of execution, which assists with the saxophonist's angst-driven tone poems. With frenetic abandon and yearning lines, Kÿchen's hyper-expressionism could make Albert Ayler sound like a purveyor of children's lullabies, as the band embarks upon a whirlwind course of action, sans a few temperate moments.

The trio goes on a search and conquer mission during "Strid Comes," letting it all hang out. The group exorcises the demons here and during other works, while paralleling the heady subject matter. At times, it appears that Trespass Trio is communicating doom and gloom or something akin to a Faustian bargain, but in effect the musicians simply rev it all up and move forward with an underlying theme, seemingly structured on a chaotic premise. Conjuring up an aggressive stance set forth by a brutish modus operandi, there is the occasional contrast with minimalist-like detours along the way.