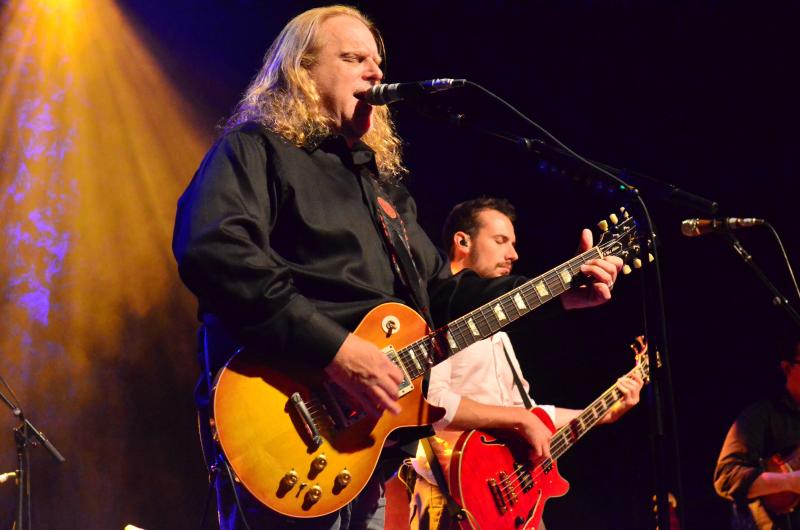 Warren Haynes is a musician's musician. He just loves to play. At one point, he was managing not only his solo career but the lead guitar seat in two major bands—the Allman Brothers Band and Gov't Mule. That's a heavy schedule. That's a lot of music.

Haynes has also served as a guitarist for David Allan Coe and the Dickey Betts Band (which is how he came to the attention of the Allman Brothers). He has also played with the surviving members of the Grateful Dead, having toured with Phil Lesh and Friends as well as the band known as the Dead (which was originally called the Other Ones).

At the end of 2014, following the conclusion of the band's celebration of its 45th anniversary, Haynes left the Allman Brothers to focus more on Gov't Mule and his solo career. During the later part of 2014 and in 2015 he has been very productive, releasing two Gov't Mule CDs on Evil Teen Records—Dark Side Of The Mule (released in December 2014) and Sco-Mule (a collaboration between the band and John Scofield) as well as the solo offering Ashes & Dust (Concord Music Group).

Singer-songwriter Justin Townes Earle (whose middle name is an homage to Townes Van Zandt) is the son of alt-country artist Steve Earle. Townes Earle's music is a "hybrid" mix of folk, blues, rock and country. Although he has a musical pedigree that would make any music fan take notice, Townes Earle's abilities can stand on their own. His first release, the EP Yuma (Bloodshot Records, 2007) garnered critical acclaim and he has charted albums on the Billboard Top 100 numerous times since—most notably with Harlem River Blues (Bloodshot Records, 2010) at number 47, Nothing's Gonna Change the Way You Feel About Me Now (Bloodshot Records, 2012) at number 62 and Single Mothers (Vagrant Records, 2014) at number 56. These releases also reached the Top 20 on the Indie, Rock and Folk charts.

On a pleasant early October evening, at The Space at Westbury on Long Island, Townes Earle opened for Warren Haynes and delivered a highly personal and eye-opening set. Townes Earle broached the subjects that virtually every folk/country/blues troubadour does—hurt, guilt, love, loss, desolation and desperation. In Townes Earle's case he not only sings about these emotions, he has lived to tell about them. And tell about them, he does. A Townes Earle concert is part confessional, part recovery meeting and part folk-blues coffeehouse. His stark, subtle and passionate performance on this evening was riveting, most notably on "Mama's Eyes" from Midnight At The Movies (Bloodshot Records, 2009)

After an intermission, that seemed to last longer than originally planned, Warren Haynes and his backing group, the Ashes & Dust Band, appeared on stage and proceeded to provide the predominantly middle-aged audience comprised of Allman Brothers fans, Gov't Mule fans and fans of jamband music—in short Haynes fans—with a career-spanning retrospective. Following the opening tune "Spots of Time," which Haynes wrote with Phil Lesh and recently released on Ashes & Dust, the main set began with a bevy of covers that included Neil Young's "Revolution Blues;" Phil Lesh & Friends' (ode to Jerry Garcia) "Patchwork Quilt" and a soaring version of "Blue Sky" followed by "Instrumental Illness," both originally by the Allman Brothers. Switching gears to Gov't Mule, Haynes shined on "Lay Of The Sunflower." He also returned to his most-recent release offering additional Ashes & Dust songs such as "Blue Maiden's Tale," "Company Man" (with its Dylanesque feel) as well as "Is It Me Or You" and the "Stranded In Self Pity" (with its New Orleans vibe). Haynes also dipped into his past solo catalog with "Hattiesburg Hustle" a cautionary tale about fame and ego from Man in Motion (Concord Music Group, 2011).

The main set closed with Little Feat's "Skin It Back" and the Allman Brothers' "Jessica." For the encore, Haynes and the Ashes & Dust Band were joined by Townes Earle for a rollicking version of Billy Joe Shaver's classic "Georgia On A Fast Train."

Haynes, who was hailed as number 23 in Rolling Stone's list of the Top 100 Greatest Guitar Players of All Time, lived up to the billing. He also proved equally adept on vocals. His soulful performance was equal parts jamband and southern-influenced rock but gave a nod to folk, roots music, blues, gospel, Americana and good old fashioned rock 'n' roll.