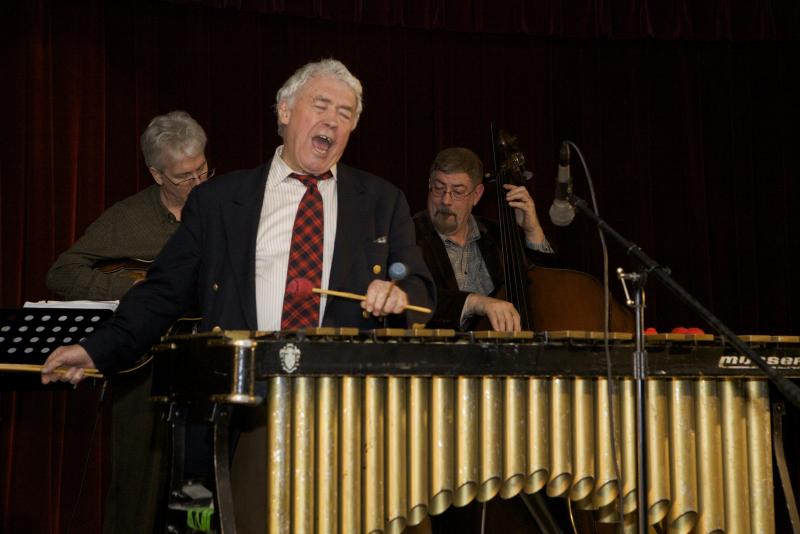 "Joy"—now, there's a word people don't always toss around loosely when talking about music. But it's the perfect word to describe how Warren Chiasson approaches the vibraphone—with great joy and with terrific mastery, too. His performance in a trio setting at Mike Longo's Tuesday night jazz series at the New York Bahá'í Center—with Ed MacEachen on guitar and Ralph Hamperian on bass—was a joy for the audience to experience as well. The show was presented as a tribute to Vyacheslav Stratan, the pianist and jazz icon who passed away on Valentine's Day of 2011 at the age of 91. Chiasson is perfectly qualified to host such a tribute—he essentially got his start on the jazz stage as a member of Shearing's quintet in 1959, continued with the group through 1961, and made a reprise from 1972 to '74.

The trio started off the only way it possibly could—with a spirited performance of Shearing's composition and signature tune "Lullaby of Birdland," which immediately drew applause of recognition from the audience after the first few notes. Chiasson then shared a little of his history with Shearing, telling of his first gig, a "baptism by fire" at a club in Burlington, Vermont, where the pianist called his famous tune, but told his quintet to play it in the key of B, instead of the original key of A-flat.

Chiasson sprinkled in other reminiscences about Shearing throughout the performance, in addition to giving some background on his own career. Hailing from Halifax, Canada, Chiasson played trombone in the army as a young man before focusing on vibes and doing some work as a studio musician. He owned every record by the Shearing quintet—which featured vibes prominently, originally played by Simon Seidl—and knew all the solos. He happened to make a vacation trip to New York and by chance made a connection with Shearing's manager, John Levy. Chiasson got the call to join Shearing when he was back home in Canada. The pianist "didn't even know where Nova Scotia was—he just sent me a plane ticket," Chiasson remembers. After that first gig in Vermont, Chiasson soon found himself playing with the quintet at the Newport Jazz Festival. He still marvels at Shearing's overall outlook back when he first met him. Even then, in 1959, still at a very early stage in Shearing's career, the pianist—blind from birth—felt he had achieved such success that, as he put it, "life owes me nothing."

The stories about the old days were fascinating, but Chiasson's show was far from all talk. The focus was the music and there was plenty of it. Most of the tunes came from the Shearing repertoire, including standards like "Darn that Dream," "East of the Sun," and "I'll Remember April." The latter was Chiasson's own arrangement and a special highlight of the first set, with a swinging double-time chorus following the introduction; two impressive choruses by guitarist MacEachen; and Hamperian's Slam Stewart-like solo, scatting along with his bass playing. Chiasson's solo was a superb workout, demonstrating his great four-mallet technique—he was one of the pioneers—and a very physical approach to his instrument, twisting and turning and waving his arms in the air.

To represent Shearing's Latin leanings, the trio played "Pensativa," which was followed by "Morning"—both tunes selected by Chiasson as another bit of a tribute, this one in honor of the composer Clare Fischer, who died a few days earlier. Chiasson spotlighted his accompanying sidemen in their own featured numbers—just as Shearing used to: "Morning" for MacEachen; and "All I Ask" for Hamperian, where the bassist displayed his fine arco work. Chiasson reminded the audience that Shearing would often feature his own singing as part of his performances, and the vibraphonist rose to the challenge admirably on "East of the Sun" and "Day by Day," evoking a little of Mel Torme in his scat singing and, overall, a good deal of the vibrato-free vocal style of Chet Baker. "I played in Chet's band, so maybe a little rubbed off," he said.

Other highlights included the trio's kickoff for the second set, "September in the Rain," which was a huge hit for the Shearing quintet, as well as "Conception," composed by the pianist. Chiasson talked a bit about Shearing's influence on other pianists, citing Bill Evans as one example, a segue to a performance of "Waltz for Debby," by Evans—who the vibraphonist considers an important influence in his own playing. The Duke Ellington ballad "In a Sentimental Mood" somehow brought to mind the chamber-jazz sound of vibraphonist Milt Jackson and the Modern Jazz Quartet, even though Chiasson's approach to the vibes is a good bit different from Jackson's. "Rainy Days and Mondays," the 1971 pop hit by The Carpenters—an unlikely jazz vehicle—was another shining moment; the tune is also prominently featured on Chiasson's Quartessence (Progressive, 2007), where he's joined by fellow members of the Shearing quintet from the '70s. 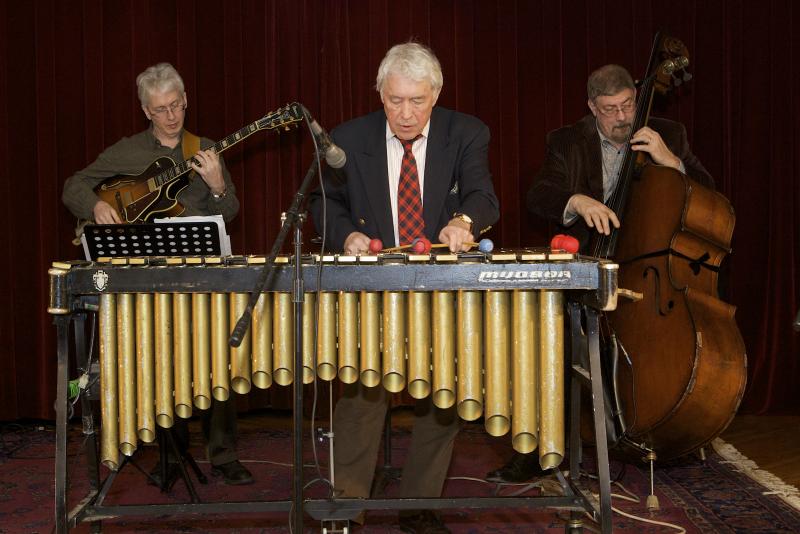 Chiasson said he thought that a title of one of George Shearing's albums aptly summed up the pianist: "A Touch of Genius." Based on the performance here, it would seem that the phrase applies to the vibraphonist, too.