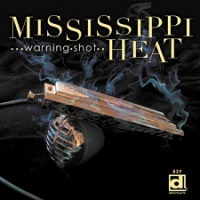 My father, born in 1915 and having seen and heard such, would call Warning Shot "Roadhouse Music." More technically, this is "jump blues" employing a larger-than-average band with an unidentified horn section on a majority of the 16 selections, the longest clocking in at 5:36 and the shortest at 3:00. This is an old-fashioned recording of 45 rpm singles ready of radio play, the majority of which would play well on what remains of independently-programmed radio.

Mississippi Heat is led by one Pierre LaCocque, a fine harmonica player in the vein of Charlie Musselwhite and Paul Butterfield. LaCocque penned 10 of the songs on Warning Shot played all of the harmonic and produced the recording. Hailing from Chicago, LaCocque came by his abilities honestly, capable of playing every style between Sonny Boy No.1 and Little Walter Jacobs.

What Warning Shot is not is a rehash of the poor maligned twelve-bars ad nausem. The styles range from the Elmore James-inflected "Sweet Poison" to gulf humidity of "Come to Mama" and "Recession Blues." The swampy dirge "Evaporated Blues" sung by Michael Dotson contains an overdriven Tony Joe White propelling a modified version of Son House's "Death Letter Blues."

LaCocque gives an instrumental "Your Cheating Heart" that recalls the best of Floyd Cramer and Boots Randolph's work in the 1960s. It is a romp; like the entire recording. Other standouts are Inetta Visor, who belts with the best of them and Neal O'Hara who excels equally on piano and organ. Enjoy this recording with a shot of Jack Black with a Jax back.