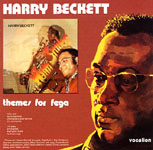 Although Europe has produced many an accomplished and innovative jazz musician, a great number of ultra-talented ones remain in obscurity. Vocalion puts the spotlight on one such forgotten genius, British trumpeter Harry Beckett. The double CD combines the latter two of his three sessions for RCA; which were not only his debut recordings as a leader but also remain the most critically acclaimed of all his work. Each CD is, in fact, a straight reissue of each album: 1971's Warm Smiles and 1972's Themes For Fega.

Warm Smiles is more in the modal vein with hints of free playing. It has strong compositions, creative interplay between the musicians, and refreshingly innovative soloing on each of the pieces. Themes for Fega is more of a single unit, with each track acting like a separate movement of an expansive free jazz suite that starts with a short but intense flugelhorn solo without the participation of any of the other instruments and ends in a similar way. The music here is still modal but definitely freer without sacrificing the strong melodic quality.

In addition to the leader's trumpet and flugelhorn there are innovative solos by saxophonist Alan Skidmore and vibraphonist Frank Ricotti. Both musicians appear on both records and are backed by a sympathetic rhythm section that, in addition to supporting the soloists, adds a deliciously dark yet spiritual mood to the music. The music becomes more rewarding on repeated listens.

The sound quality of both sets is excellent although a bit clearer on the studio-recorded Warm Smiles as compared to the live recording of Themes For Fega. In short this an exciting reissue of a great pair of albums by an often undeservingly overlooked master musician.

CD1 (Warm Smiles): Harambee; Tender Is The Sky; To Me, For Me; Warm Smiles; Tomorrow Morning Early. CD2 (Themes for Fega): Little One; Spiral Feelings; Chandeliers And Mirrors; Cry Of Triumph; I'm Easy; Enchanted; Everyone Is Me; Farewell Fega.