WAR with Malo At Stern Grove 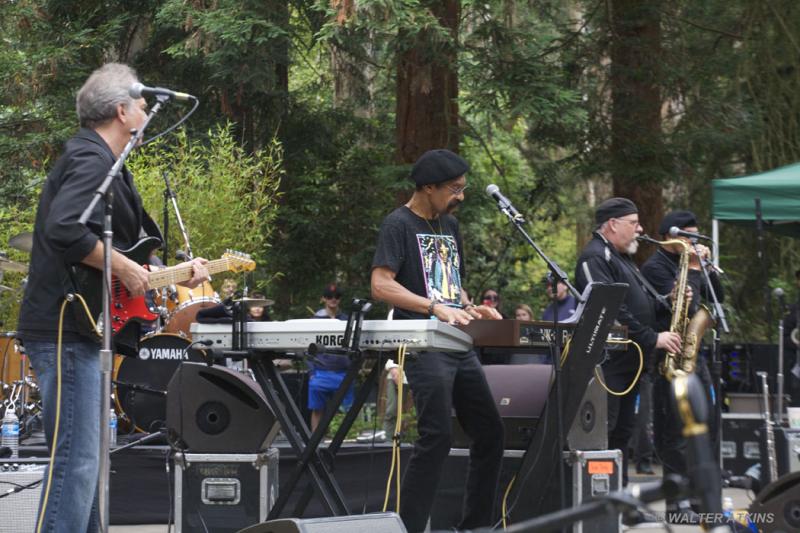 The seven member group presented their catalogue of well known classic WAR tunes covering the 1970s through the late '80s. The sparkling set list included: "Me And Baby Brother," "Slipping Into Darkness," "Cisco Kid," "Spill The Wine," "Galaxy," "The World Is A Ghetto," "Cinco De Mayo," "Summer," "All Day Music," "So," "Why Can't We Be Friends," and the mighty "Low Rider."

San Francisco Bay Area favorite Malo opened up the rousing day of music and the lively crowd was fantastic! They performed "Techno Rumba," "Ritmo Tropical," "Take My Breathe Away," "Nena," "Café," and closed with their signature track "Suavacito." There was an intermission to allow the busy stage crew to set up for the next artist followed by the traditional bell ringing announcement for alerting the guests.

Throwing up a peace sign, Jordan and WAR took the expansive stage and thoroughly engaged the friendly SGF house. When the group played "Me And Baby Brother" from their epic chart topper All Day Music (United Artists Records, 1971), the venue roared in appreciation.

"Spill The Wine," from the certified gold album Eric Burdon Declares War (MGM Records,1970) was a real crowd pleaser with hundreds of fans singing along. The song was inspired by a band member's accidental wine spill on a studio mixing board. The funky tune Galaxy, was also the title of WAR's 1977 gold album (MCA,1977) that paid homage to the mega movie and global franchise launcher Star Wars, which opened the same year.

WAR's lead vocalist talked about how they missed the massive, generation defining Woodstock Music & Arts Festival because, "We were touring with Bob Marley And The Wailers." Early in the killer set, Jordan asked if people were drinking, then jokingly commented, "Save me some." Also during their head lining session, he talked about how the celebrated Jimi Hendrix joined War and Eric Burdon on stage to jam. At the time, they were performing at Ronnie Scott's Jazz Club, the famous music venue in London's Soho district the night before the guitar legend died.

Jordan left the stage to get close to the people and let them sing along with WAR. At one point, he handed the wireless microphone to a man who actually sang pretty well, and then he improvised some lyrics saluting the Bay Area. Jordan paused and smiled with approval as everyone enjoyed the moment. He then returned to center stage to rejoin the band. WAR had the surging audience dancing and swaying to their soothing rhythms all afternoon. Young and old fans were putting up peace signs throughout the afternoon.

As clouds slowly started moving in from the west, they played both the party ready anthem "Cisco Kid," and the somber titular track from The World Is A Ghetto (United Artists Records, 1972). The record earned WAR the coveted Billboard Magazine's Album of the Year award in 1973.

People crowded the front of the wide stage to get closer to the music and enjoy the familiar sounds filling the lush outdoor location. The unmistakable "Why Can't We Be Friends,"' and the WAR signature tune "Low Rider" helped closed out the fun vintage set with the grove over flowing with peace signs. WAR had presented another day of sensational music of world peace, love and fun for Stern Grove's thousands of music supporters.

Linda and Margarita, two San Francisco Bay Area music fans commented how much they enjoyed seeing WAR and Malo, and would be heading out to see Lourde later in the day at another concert. On taking in two major music festivals on the same day, Linda said, "I'm going to drop at the office tomorrow." Better to stand up today to thoroughly enjoy a Big Fun Sunday, and drop on Monday was my thinking.