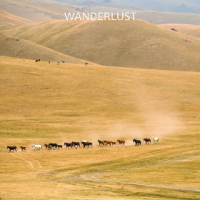 Wanderlust the band is led by pianist and songwriter Mike Adcock, based in Cheltenham in the west of England. Wanderlust the album features eight of Adcock's compositions (alongside the Norwegian folk tune "Nøkkendans") that draw on a wide range of musical styles, with a shared sense of joy and positivity.

The relaxed shuffle that underpins "From The Man" sets the mood of much of the album—warm, uncluttered, welcoming. It's carried into "Impols"—where Steve Rowley's tin whistle adds a certain bucolic charm—and the title track with its cool, laid-back, tenor solo from Chris Cundy. Things can get more upbeat, as they do on "Out Of The Shadows," but "Oslo Jive"—Norway-meets-South Africa via the English tradition—manages to be even more relaxed, with a lovely combination of rolling rhythm and rich melody.

The addition of Beth Porter's cello and Cundy's bass and contrabass clarinets gives Wanderlust the chance to craft some unusual sound combinations and harmonies. Both instruments can be mournful, but Porter and Cundy are notable for their ability to keep things light. The infectious "Another Way"—wandering from this world into the world of Charlie Brown with its Vince Guaraldi-like vibe before veering off into more improvisational territory—closes proceedings with Cundy's assertive reeds playing to the fore.

Although Wanderlust is inspired by music from around the world, the resulting tunes inspire a casual and sedentary approach to life rather than a desire to stride out across the planet. A comfy chair, a glass of something and eight tunes from Wanderlust on the hi-fi. Any movement should be saved for dancing.

Out Of The Shadows; From The Man; Impols; Wanderlust; Nøkkendans; Oslo Jive; Southern Hymn/Rainbow Twist; Another Way.