By DAN BILAWSKY
September 27, 2011
Sign in to view read count 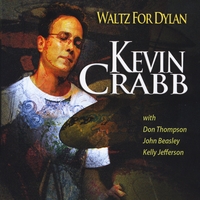 Drummer Kevin Crabb's name resonates most in drumming and education circles, but this album is all about his playing and composing. When the Los Angeles-based drummer isn't busy teaching, or espousing the virtues of his former teachers in articles for Modern Drummer magazine or elsewhere, he gets behind the kit and puts his extensive musical knowledge to good use within his own songs.

Waltz For Dylan features a tight foursome with a unified mission to serve the songs before all else. Crabb's band takes an all-for-one approach to music making and, while each man is capable of producing compelling solo statements, as demonstrated throughout the album, the real thrill is in the group interaction. This quartet is able to create a strong group identity on this nine song program, despite the fact that the music itself isn't unified in a stylistic sense. Upbeat, Latin-leaning music ("Nightscape"), standard issue, mellow swing ("River Sticks"), contemplative aural reverie ("Flight"), and several other strains of sound comfortably coexist and complement one another.

Saxophonist Kelly Jefferson often serves as the beacon of melodic direction for this band, but pianist John Beasley is at the center of this group's sound. He brings a light, yet firm, touch to the piano, and he's continually impressive, whether trading solos with Crabb ("Ecology"), taking a trip on his own, laying down an impressionistic introduction ("Flight"), or simply comping in compelling fashion. While both men help to breathe life into Crabb's compositions, neither one overshadows the drummer. Crabb's drumming is a touchstone of understated taste and, like bassist Don Thompson, he works his way into the conversations instead of simply working beneath them.

The manner in which Crabb plays actually makes it worth re-evaluating the very idea of a "drummer's record." If this term is simply synonymous with speed, chops, rhythmic complexity and intensity, then this album wouldn't fit the bill, but fewer and fewer musicians use those ideals as a measuring stick for drumming quality. Touch, taste, and the ability to wholly integrate oneself into the musical make-up of song, while moving beyond the role of a mere timekeeper, is the benchmark for drumming quality today and, by those standards, Waltz For Dylan is as much a "drummer's record" as anything out there.