Nilson Matta: Walking With My Bass 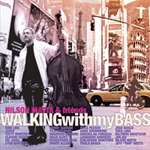 Nilson Matta has long been considered one of the best bassists to emerge on the Brazilian music scene, primarily as a member of Trio de Paz. Although he has had few opportunities to record as a leader, he has been widely utilized as a sideman. On this collection of studio sessions, he repays the debt to some of them by recruiting nearly two dozen different musicians with whom he has worked over the past three decades. As a result, Matta produces a multifaceted recording that never gets stuck in a rut.

His brisk setting of "Berimbau (with pianist Kenny Barron, drummer Jeff "Tain Watts and percussionist Jorje Silva) adds a slightly dark edge, while guitarist/vocalist Joyce's arrangement of "I Only Have Eyes For You is deliberate and full of emotion. His playful take of "Take the A Train features Mauricio Einhorn (a harmonica virtuoso the caliber of Toots Thielemans) and drummer (and fellow Trio de Paz member) Duduka da Fonseca, while also showcasing Matta's considerable skills as a soloist.

Matta's conception of "Night and Day, including tenor saxophonist Harry Allen (sounding a lot like Stan Getz on this occasion), flutist Anne Drummond and percussionist Cyro Baptista, was briefly explained to the musicians and nailed on the first take. This delightful disc easily stands up to repeated spins.