By MARK SULLIVAN
January 3, 2016
Sign in to view read count 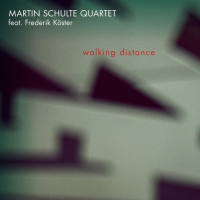 German jazz guitarist Martin Schulte opens this excellent quartet outing with the title tune. The title must be a play on the prominent walking bass line provided by bassist Matthias Nowak, but it's also a catchy, swinging piece with dramatic, unexpected stops (as well as a showcase for guest trumpeter Frederik Köster). Tenor saxophonist Peter Ehwald gets plenty of space to strut his stuff on the following "Driftin.'" The longest track "On A Silent Day" brings Köster back for his second guest spot, and takes its time building to a climax with both horns, along with plenty of heat from the rhythm section.

"Picture Hunting" gives drummer Mirek Pyschny a chance to break out the brushes, and to play a brief drum solo. "Lights" provides interesting contrast: after a gentle opening, Schulte kicks in an overdriven guitar sound, and the whole band responds with a frenetic interlude, much freer than the rest of the record. The final track is the only cover in the set, an often rubato treatment of the McCoy Tyner ballad "Search For Peace." A somewhat surprising choice from a band that would clearly have enjoyed digging into an up-tempo Tyner tune, but a lovely way to end the program.

Schulte is an exceptional modern jazz guitarist with an international perspective. Following his study of jazz guitar at the Hochschule fuer Musik und Tanz in Cologne, he spent a year at the Escola de Musica de Catalunya in Barcelona, Spain, and a year studying "Performing Arts" in Queens College at New York City University. His basic sound and approach come from bebop, but there's room for rock influences, and he's also a fine composer and arranger. Worth keeping an eye on.