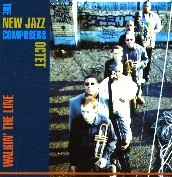 From the sound of it, the future of the large group ensemble is clearly in good hands with the New Jazz Composers Octet, a combination of old school horns and creative young jazz musicians. The NJCO is carving out a name for itself by paying respect to names such as Lee Morgan, Freddy Hubbard, and Joe Henderson through interesting compositional and arranging skills.

The New York based octet has composed and performed together for over five years, with a common aspiration to play adventurous, challenging, and modern music. Walkin’ the Line is their second release, featuring up-and-coming cats such as trumpeter David Weiss and saxophonist Myron Weldon, along with a set of other vibrant musicians.

With skills that can compete with any large ensemble group, the octet features progressive compositions in a post-bop vein, where the emphasis is creating music that is fresh and not nostalgic. What sets them apart is the group’s detailed delivery, which is rooted in tradition, yet contemporary. Notwithstanding some stellar individual performances, the group shines as a whole. A few of the written offerings should be noted, such as “The Fork In The Road” by bassist Dwayne Burno which features nice horn interactions in a heavy swing mode. Pianist Xavier Davis’ "The Dove” glides in peaceful harmony with a timeless groove, while David Weiss’ title composition is a serious statement of the depth of the group’s abilities. Swirling horns, tight arrangements, and strong solos fill the recording, resulting in a vibrant outing from the NJCO.