Following the unprecedented acclaim for AACM trumpeter Wadada Leo Smith's appearance at London's Freedom of the City Festival in May, Cafe Oto had quickly invited him back to town for a two night residency in north London. Unable to replicate Smith's celebrated set with twin drummers, tonight he was scheduled to perform first in a duo with Mark Sanders behind the trapset, and second as part of a quintet. However J Spaceman cancelled (ticket holders were actually offered their money back at the door, showing the guitarist's anticipated crowd pulling power) so it was to be a foursome with the initial pairing augmented by the in demand John Edwards on bass and John Coxon, once half of Spring Heel Jack, on guitar and effects.

Smith has developed a strong working relationship with London's improvisors, following his appearance on Spring Heel Jack's The Sweetness Of Water (Thirsty Ear, 2004) which also included Edwards, Sanders and Coxon. Subsequently he has recorded with the guitarman on New York Duets (Treader, 2007) and with Sanders and others on Abbey Road Quartet (Treader, 2007), so there is no lack of familiarity with the trumpeter's oeuvre. Strangely given the relatively few precedents in the jazz canon, the trumpeter also boasts a particular rapport with drummers having waxed no less than three duets with various stickmen, including the wonderful Wisdom of Time (Intakt, 2002) with Gunter Baby Sommer and the very different but similarly rewarding America (Tzadzik, 2009) with Jack DeJohnette. 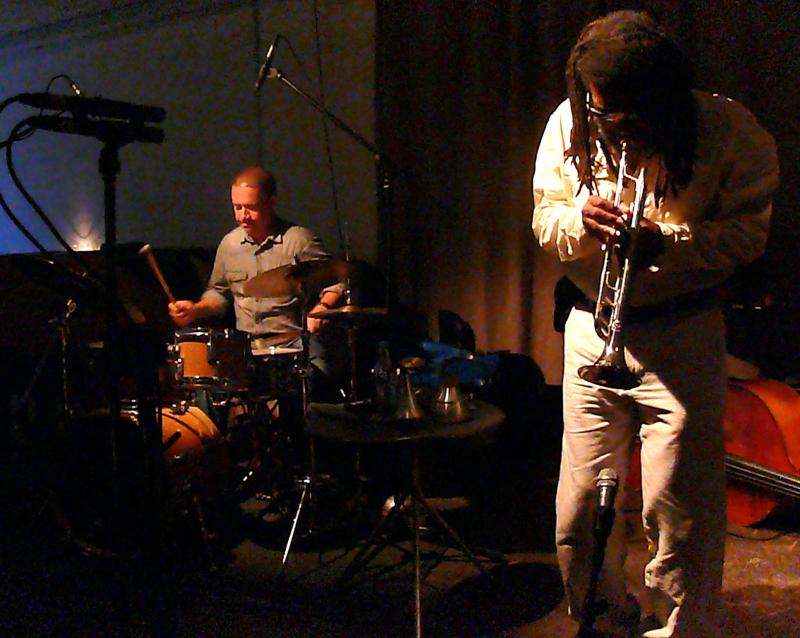 Smith opened the duet with a fractured oratory of short brassy bursts, playing with the bell of his horn pointing straight down to the floor, while Sanders worked up into a rolling polyrhythm. Characteristically the trumpeter sculpted his lines with as much silence as sound weighing up note placement so that every utterance came across as measured and deliberate. His fanfares were followed by rapid fire series of short notes, pitched against Sanders throbbing pulse and shimmering cymbal accents.

More than almost any other improvisor Smith deals in instant composition. Evidence aplenty came in the second of their three pieces: a textbook example how to add form to improv. As a change of pace the American took up a thumb piano for a litany of metallic twangs matched by Sanders' tonal play on gongs, vibrations from a bowl rubbed on top of his snaredrum and a woodblock. Once the mood was set, Smith inserted a mute in his trumpet eliciting quiet pinched tones, quavering and delicate, which became a recurrent motif alternated with contrasting approaches such as gurgles and splurts or explosive outbursts. Sanders continued throughout. Together they evoked an elemental ritualistic soundspace with drumbeat echoed by one note trumpet exclamations. Finally Smith reinserted the mute, with Sanders again on brushes, mirroring their low volume opening tactics. At the conclusion the pair exchanged smiles and embraces affirming their satisfaction.

Smith listened especially closely throughout, both to his partner and his own sound. He directed his horn with care and deliberation to alter tonal color and dynamics. Sometimes he pointed it directly at the audience, but more often at the floor, though even then he varied the distance from the ground to modify the reverberations. There was also ample demonstration of his mastery of extended techniques, using exhalations and small bubbling lip squeaks; splendid to behold in a small intimate space like Cafe Oto where every nuance in this spacious duet was audible. 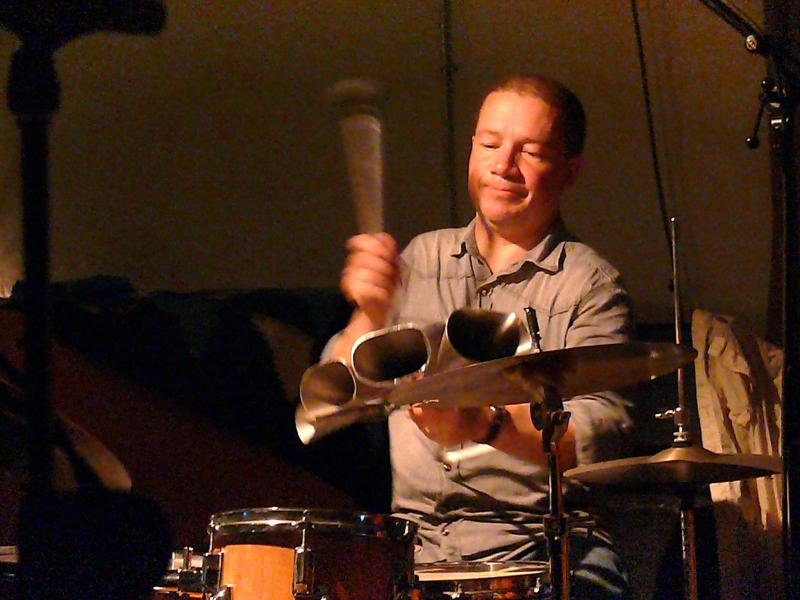 Sanders proved a worthy foil, adept at tumbling freedom, but also timbrally savvy, extending his range with chimes and sticks, holding a tambourine above his cymbals to modulate their shimmer and simultaneously produce ringing overtones. One particularly notable passage came when the drummer attenuated the cymbal resonance with his hand in a stop start rhythm which meshed perfectly with the brassman's sound/silence approach.

Such was the intensity of the first set, when combined with the heat from the stage lights, that the trumpeter was forced to change his shirt as it was completely sodden. Luckily he had another for the second set as a quartet. Edwards' deep buzzing dirge jostled with Coxon's oblique guitar chords until Smith entered riding the swells. There was no star and sidemen attitude in evidence here. Smith often stood back from his mic, perhaps to integrate better into the group conception. After a rubato beginning an open drifting ambience held sway in which each member played his part.

Coxon's scrabbling guitar and scratchy tapping contributed density to the piece. His repeated patterns, demarcated through judicious use of effects pedals provided a shifting backdrop for the freewheeling invention. Edwards veered from cascades of resonant bass notes to careening arco drones, and even both together as in one remarkable sequence he plucked a thrumming pizzicato and at same time bowed his strings below the bridge for an overlay of haunting harmonics. Sanders continued where he left off, contributing rhythm, but not always momentum, until suddenly gears shifted and all four were rushing headlong at breakneck speed. 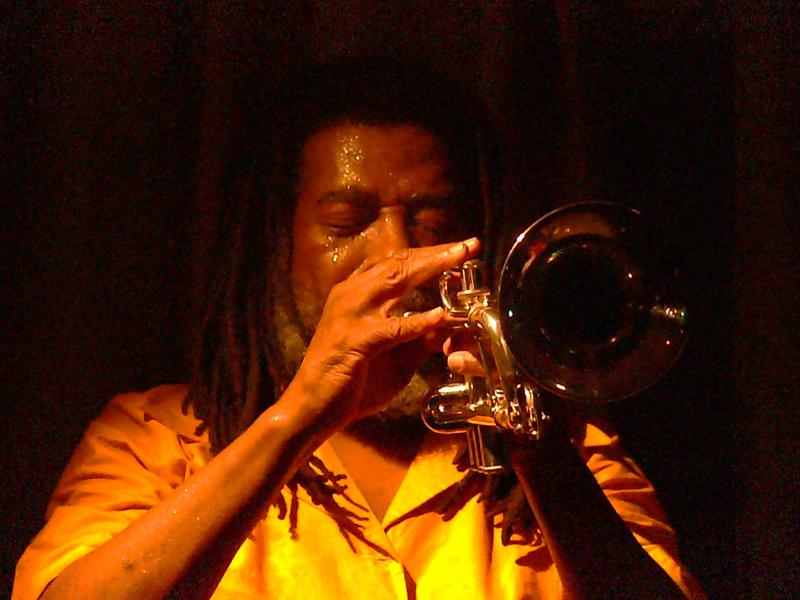 At the start of the second piece Coxon lead off with rasping electronics. Smith added an electronic sounding breathy hiss which had listeners puzzled, looking round for the source of the noise, as it didn't resemble anything like a trumpet. Smith was responsive and still listening intently. In one dense section the trumpeter sought a contrast, layering long tones and fanfares against the sonic tapestry. But he was equally comfortable in the quieter improv sections, essaying tremulous sustains at low volume over spacey guitar, gongs and cymbals. They finished to great applause. There was no encore, but afterwards the American remarked how pleased he was to be here and how much he enjoyed the playing of John, John and Mark. No one disagreed.