By DAN MCCLENAGHAN
October 12, 2008
Sign in to view read count 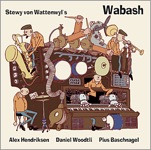 It never hurts to have a great CD cover. Wabash, from Swiss keyboardist Stewy von Wattenwyl, features art reminiscent of Miles Davis' sometimes maligned On the Corner (Columbia Records, 1972). But while the Davis cover seemed to project hipness with his cartoon characters, von Wattenwyl's pencil-necked, slouching musicians—beside, upon and within a monolithic music machine—seems to be an invitation to a good, unpretentious straight-ahead listening experience, and that's just what you get with the CD.

Von Wattenwyl's fine Dienda (Brambus Records, 2005) featured the keyboardist in the context of a piano trio. Wabash finds him strutting his stuff on the Hammond B3 organ, in the company of saxophone, trumpet and drums.

The title tune is from the pen of the late alto saxophonist Cannonball Adderley. Wattenwyl's band has that Cannonball vibe: a no-frills mainstream sound with a lot of soul, together with some Booker T and the M.G.'s feeling, a lot of solo space for the two horns, and the deeply soulful atmosphere coming from the leader's adept organ work.

In addition to the Adderley tune, the group cover's Duke Ellington's "Purple Gazelle," Duke Jordon's "No Problem," George Coleman's "Amsterdam After Dark," and the Eric Alexander/Jim Rotondi gem, "Burner's Waltz," along with a couple of von Wattenwyl originals and a couple more from Alex Hendriksen's pen; all with saxophonist Alex Hendriksen burning on tenor beside trumpeter/flugelhornist Daniel Woodtli's soft, warm tones.

Very fine music, made in Switzerland, yet sounding very American.