By C. MICHAEL BAILEY
November 4, 2012
Sign in to view read count
Track review of "Round Midnight" 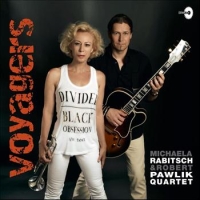 Austrian vocalist/trumpeter Michaela Rabitsch and guitarist Robert Pawlik have fronted a quartet and performed as a duo for the past 15 years, releasing three CDs ahead of the present Voyagers. Concentrating on original compositions that lean in a commercial-popular direction, the pair has received a good deal of buzz. The majority of Voyagers is prepared very much with a broad European audience in mind. Rabitsch's vocals are smoky (she is no female Chet Baker-as the press has called her-because she sings better than that). Her trumpet playing is confident and sparse, saying more with fewer notes. Pawlik is an excellent guitarist with the necessary empathy not to get in Rabitsch's way when she sings.

An important piece on the disc is audaciously entitled "Round Midnight." Gratefully, this is an original that, like the famous standard, is intended to evoke a mood from the late hours. Rabitsch's silky vocals purr their way through the lyrics, with her muted trumpet recalling Miles Davis, but miles and miles from that performance. Pawlik misses nothing, delivering a pithy solo that comes close to Joe Pass in places without achieving the excess. This is interesting music produced in a place fertile with new sounds and ideas. Voyagers contains compelling contemporary music, well composed and performed.