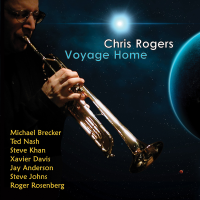 Recorded in February of 2001, Voyage Home is trumpeter Chris Rogers' long-awaited debut album as a performer, composer and band leader. Released fifteen years after its original recording, the music documents performances from incredibly talented artists whom Rogers has known his entire life, including the late saxophonist Michael Brecker as well as a statement lifted from a 1965 album by Eddie Palmieri featuring legendary Latin jazz trombonist Barry Rogers—and father of the leader—who passed away well before this recording. An educator and thirty-year professional musician in New York city's vibrant jazz scene, Rogers finally offers this album after a series of life experiences including being a devoted stay-at-home dad, that captures part of his personal journey so far, with the impressive musical Voyage Home.

Featuring nine original compositions with arrangements from the trumpeter, the swinging session of music begins with an aggressive twenty-four bar blues delivering changes that run counter to the norm which is why the title "Counter Change" seems so appropriate. There are six dedication pieces beginning with the title-track, for the late pianist Don Grolnick, showcasing some fine play from saxophonist Ted Nash punctuated with haunting bop phrases from the leader himself. The late great saxophonist receives more than just a passing mention here and the feverish "Whit's End," is a dedication to Brecker who delivers mighty solos reflective of his legendary status, while the pieces also highlights superb key work from piano man Xavier Davis.

The late trombonist and father of the leader, receives a dedication here on "Ballad for B. R." essentially a four-horn ballad especially crafted for this purpose, includes warm statements from the trumpeter as well as the trombonist, in the opening cadence gently borrowed from the Palmieri album Mozambique. The brief but spicy Latin-tinged "Rebecca," finds Rogers performing on the muted horn as guitarist Steve Khan and drummer Steve Johns, weigh in with strong statements of their own in another dedication, this time to Ray Barretto.

After performing several hard-driving tunes, the band turns on the charm with another Latin-flair on the "Ever After" love song displaying some of the trumpeter's finest solos of the session accompanied well by the guitarist. The leader takes to the muted horn once again this time, delivering several Miles Davis-like horn phrase on a tune that also features bassist Jay Anderson in a pronounced role. The remarkable set ends on the appropriately-titled "The 12-year Itch," intimating the trumpeter's personal itch to finally finish this recording and does so, with this dazzling and swinging finale. Well, though it may have taken a long time coming, this Voyage Home was well worth the wait for the music, the charts and the musicianship, is all first rate. Let's hope that this is not all that Chris Rogers may have hidden and percolating out there for a release.

Counter Change; Voyage Home; Whit's End; The Mask; Ballad for B. R.; Rebecca; Ever After; Six Degrees; The 12-Year Itch.