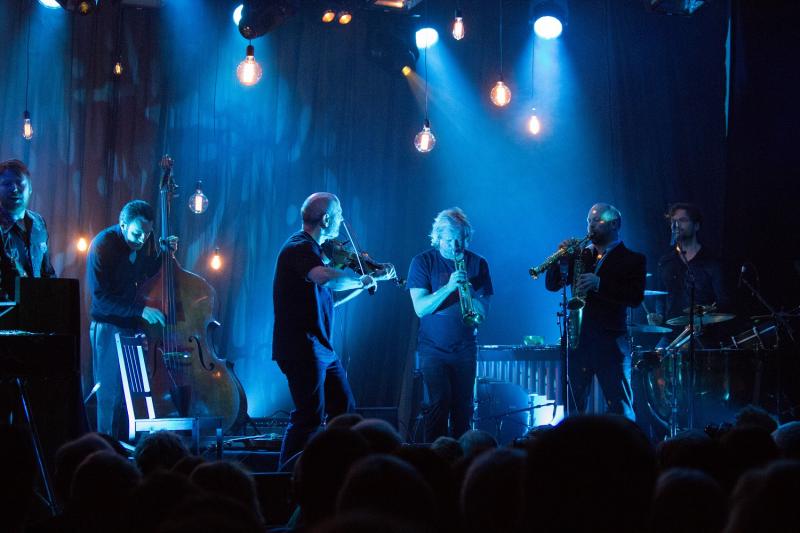 By IAN PATTERSON
April 1, 2016
Sign in to view read count

The freedom to congregate, to express creativity and to have fun into the bargain is something we often take for granted, as the sight of a few asylum seekers looking on underlined. —Ian Patterson

Perched high on the mountain side, the weather-beaten wooden farm houses of the Voss folk museum command a truly impressive view of the town below, ringed by snow-capped mountains, interlocking valleys and ice-covered fjords that stretch to the four points of the compass. Founded in 1917—the same year the Original Dixieland Jass Band recorded the first jazz record—the museum's bric-a-brac of bygone days and largely bygone ways represents an eye onto the past. It's a fascinating, beautiful relic.

Traditions in jazz, just as in life, have never stood still for long. They might wither and die, as in jazz's fabled cutting contests or the so-called 'ambushes' of some of the early beboppers, and they can take unexpected new directions whose impact is felt over time—like Sun Ra, Charles Mingus and Ornette Coleman—but they rarely stand still.

To remain blind to new developments—to new possibilities—is to atrophy, and in the end, to be consigned to museums.

Yet our urgency to progress is nearly always tempered by a healthy respect for the old ways. That balance is surely important. If it wasn't, we wouldn't need to make pilgrimages to museums half-way up mountains; we wouldn't need to guard selective memories so preciously. As any historian will tell you, the greater our understanding of the past, the greater our handle on the present. Admittedly, it's sometimes easy to get lost in one at the expense of the other.

Vossa Jazz excels at exploring the symbiotic relationship between past and present, between folk and jazz as practised and understood in Norway and elsewhere. These dualities are a defining element of this one-of-a-kind festival and the 2016 edition was no exception.

The program got off to a flyer with the twelve-piece Lokomotiv, second-year students all of the famous Trondheim jazz program. With two drummers, two guitarists, two double basses and a harmonica player in the ranks alongside a pianist, three saxophonists, and a vocalist, the line-up was striking. So too the music, which ranged from chugging blues, ethereal sci-fi lyricism and urban jazz-funk to schizophrenic polyphony. The orchestral ambition of "Cooper Fuglen" hinted at the influence of Marius Neset but these were all tunes where the individual personality of their respective composers shone forth.

Agile as a quintet and as powerful as a big-band at full throttle, the solos were exhilarating and the collective voice utterly persuasive. Lokomotiv's lunchtime performance was a great advert for jazz and warmly received by the school children and music students present in the Festsalen of the Park Hotel.

Then, having packed up leads, pedals, amplifiers and drum kits, Lokomotiv crossed the road and did it all again, this time in the well-appointed surroundings of a local bank to an audience of more seasoned vintage.

Music for the Ages

While many jazz festival these days have special programs for kids, few take Vossa Jazz's approach in involving the young, old and disadvantaged alike. Write an Opera, for example, in the Voss Culturehouse, presented an opera written and performed by local children with professional musical accompaniment.

Whilst the twists and turns of the plot were hard for non-Norwegians to follow the enthusiasm of the children was obvious. Eleven-year old Down syndrome actor Amina excelled, dancing, as the saying goes, as though no-one was watching. To see the colourfully costumed children launch their hats triumphantly into the audience during the ovation at the opera's end was a delight that no doubt brought a tear to a few parents' eyes.

Making children central to the creative process is clearly more meaningful than to merely provide entertainment for them. To this end, for the past seven years Vossa Jazz has held musical workouts for Down syndrome children and adults. This year, over thirty children and adults aged between twelve and sixty four created a glorious polyphony in the Festsalen, an occasion punctuated by a lot of smiles and laughter.

A competition for Young Jazz Talent was part of the program in conjunction with other major Norwegian jazz festivals to help bring exciting new jazz voices to the fore.

Some of the most moving interaction between musicians and audience took place in the concerts for the elderly of Voss's nursing homes. The Valerina Fortes Orchestra—a sextet from Bergen—gave the first of three performances that day, in the Sjukeheimen nursing home. Its one-hour set drew liberally from the songbook of Kurt Foss and Reidar Bøe, popular Norwegian troubadours and radio stars from the 1940s to the 1960s. Engaging tempos, melodious vocals and no little humor characterized the folk-flavored tunes, waltzes and popular arias of love.

Some of the audience members—mostly octogenarians and nonagenarians—mouthed or quietly sang almost every word of the songs of their youth. Others tapped feet, or clapped hands as gently and quietly as the beating of a butterfly's wings. Smiles were in good supply.

At the end of the performance, Helga Øvstedal, an occupational therapist in this nursing home since 2003, spoke of the importance of such musical performances to the elderly residents. "You could see the smiles on their faces," said Helga, "but they talk about the concert for days after. Music is a great therapy for the elderly. It brings back old memories. One lady, who is eighty six, told me after, 'I want to dance.'"

Friday's wonderfully eclectic, though carefully constructed program offered a little of everything, from the scintillating acoustic/electric hybrid of Dave Holland's trio and the outré experimentation of singer Sidsel Endresen and electronics/sampling wizard Jan Bang, to the post-Coltrane jazz of the elegant saxophonist Hanna Paulsberg. Red Kite's searing, metal-edged fusion, the Afro-beat funk of the legendary Tony Allen and the sophisticated pop of Susanne Sundfør drew quite diverse crowds to Vossa Jazz and more than likely introduced some people to music they mightn't ordinarily check out.

A man nattily attired in traditional costume sounded a melodious blast from a mountain long horn to officially open Vossa Jazz 2016. This was followed by a few words of welcome from festival director Trude Storheim and then guest speaker and acclaimed writer Ruth Lillegraven. It was then the task of Dave Holland's trio, featuring Kevin Eubanks and Obed Calvaire, to kick-start the festival proper, and it did so with a continuous, largely improvised one-hour performance.

With the notable exception of Holland's outstanding recent duo collaboration with Kenny Barron, which engendered The Art of Conversation (Decca, 2014) and a memorable tour, it's hard to recall a time when Holland wasn't at the head of a quintet, sextet or big-band. This was indeed a rare treat to witness the veteran former Miles Davis sideman in a trio context, in tandem with Eubanks and Calvaire. At the end of a four-week tour, the trio's musical ideas flowed with the well-honed precision of a familiar suite, and only occasionally lapsed into jam-like passages which struggled to assert clear direction.

Having rediscovered the taste for leading a trio—possibly the first time since the late 1980s—and reconnecting with the electric guitar, Holland seems to have found fresh, fertile territory to explore. He may yet return to the larger group format he's favoured for so long but the potential of this trio suggests that it would please a lot of folk if he managed to juggle both.

With as many as four gigs running simultaneously at Vossa Jazz, a little hopping around gave a taste of the diversity of music on offer. This was made possible given that four of the venues were in the Park Hotel and the others were all within walking distance Susanne Sundfør, the critically acclaimed, commercially successful singer-songwriter, who has collaborated with electro-popsters Röyksopp, and with Nils Petter Molvaer on Baboon Moon (Sula Records, 2011) drew arguably the biggest crowd of the festival to the Voossasalen.

A minute down the road in the Gamlekinoen —an old cinema—Sidsel Endreson and live sampling innovator Jan Bang forged a bold improvisational duologue, which, while seemingly far from a jazz aesthetic, nevertheless delved into the sort of fearless improvisation that jazz typically claims as a pillar of its unique identity.

Endresen's vocalizations—syllabic and non-syllabic alike—skirted the interface between folk—melodious and lyrical—and jazz—rhythmically pronounced—and plosive utterances that bore a highly personal stamp. Bang, far from being merely electronic counterpoint to Endresen, instead engaged in exactly the same way as any improvising musician would, by bouncing ideas back and forth organically. For well over half an hour, the duo explored sonic avenues less traveled, and if at times the music seemed a little repetitive as they jammed and dug for the magic, this was the trade-off for the frequent passages of truly inspired creativity.

The rest of the evening in the Gamlekinoen promised much, with contributions from artists of the celebrated Jazzland label—celebrating its twentieth year—including Bugge Wesseltoft, Henrik Schwarz and Dan Berglund, amongst others. However, another gig back at the Park Hotel, by one of Norway's most exciting young jazz talents, was too enticing to ignore.

Whilst it's difficult to label much modern Norwegian music, the Hanna Paulsberg Concept belongs unequivocally in the acoustic jazz tradition—evoking, in spirit at least, the lyricism and compositional elasticity of Stan Getz, John Coltrane, Wayne Shorter, and latterly, Jeff Ballard's trio. Yet as Paulsberg demonstrated on Waltz for Lilli (Ora Fonogram, 2012) and Song for Josia (Ora Fonogram, 2014), her accomplished writing and her mazy improvisations are very much her own.

HPC —making its debut at Vossa Jazz—was showcasing material from its third CD, Eastern Smiles, (Odin, 2016), which broadly speaking follows in the vein of its previous recordings. The quartet eased through the gears on "Ayumi," with pianist Erlend Slettervol and Paulsberg stretching out, cajoled by the ever-dynamic Hans Hulbaekmo. The concept throughout the set, it seemed, was the tension between control and freedom within strong compositional frameworks. For Paulsberg, the song is the thing.

Hulbaekmo and bassist Trygve Waldemar Fiske's dancing African groove dominated "Hemulen på byn," while "A Coat of Many Colors"—the only tune from the group's first two CDs—morphed from delicate impressionism to more robust interplay, driven by Hulbaekmo's increasingly animated sticks. Not content to rest on her laurels, Paulsberg introduced two as yet unreleased tracks, with her beautifully weighted playing central to both.