By GENO THACKARA
December 19, 2017
Sign in to view read count 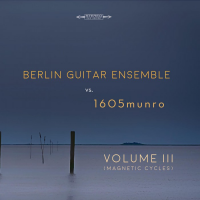 Like many things in the music world, Guitar Craft has taken on a life that no one imagined at the start. Robert Fripp's series of performance and lesson courses technically "ceased to exist" in 2010, but its tentacles have continued to spread in all manner of directions through a range of performing ensembles. There's a characteristic overall sound whose lineage goes back to the original League of Crafty Guitarists—acoustic steel-string tone, high standards of complexity and technical precision, and (vitally) a collectivism where each member contributes as an equal part of the whole. At the same time, those individual groups honor that framework in quite different ways.

The Berlin Guitar Ensemble is definitely a branch more amorphous than most. Director Hernán Nuñez has always been the central anchor, though it's been as flexible with size (ranging from seven players to 24) as it is with song choices (originals, pop or movie tunes and free improvisations alike). Just for extra giggles, they also often like to meet up with experimental artist Andrés Jankowski, known as 1605munro when behind the console, and wander into the realm of experimental electronica.

The third in this collaborative series is a strange beast that doesn't fit into neat usual categories: it's both live and programmed, meandering and directed. The group of guitarists at each session did a lot of improvising and often circulating (i.e. passing notes among the players in turn, a regular Crafty staple), though under the guidance of a conductor. Individual notes are allowed to float and fade without any pressure to fill more space. Steady plinking patterns organically come and go; in between it's a loose drift that's more about soaking in the sound than particularly going anywhere. Jankowski might judiciously sprinkle around some light beats for a subtle accent, or might just as likely cue up some brooding background synth for shading.

The mix makes a listen somewhere between patterned and ambient. Headphones are best to convey the effect of everything bouncing around the soundstage. Whether they're stringing notes into lines or interjecting in odd fits and starts, the group's emergent behavior becomes the end in itself. They never know quite where they're going, but there's always an odd pleasure in just wandering.