By KARL ACKERMANN
September 11, 2015
Sign in to view read count 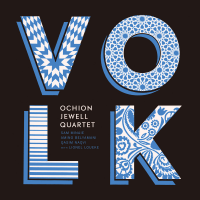 From his Appalachian roots in Kentucky, saxophonist/composer Ochion Jewell was not the most likely candidate for a livelihood in jazz. With little involvement in the genre during his early life, Jewell was nevertheless exposed to more popular music from his parents as well as the Appalachian folk music that dominated the region. With those elements engrained, his formal training in classical saxophone at the University of Louisville and later education at California Institute of the Arts helped round out a rich background that serves him well both as a composer and musician.

As on Jewell's quartet debut First Suite for Quartet (Mythology Records, 2011), he is joined on Volk by pianist Amino Belyamani, bassist Sam Minaie, and drummer Qasim Naqvi. Guitarist Lionel Loueke joins the quartet on two of the ten tracks. The core quartet has been working together for some time, having first formed associations at CalArts. Belyamani, Minaie and Naqvi improvise around Jewell with the expertise and finesse of a long established group; empathic yet independent, their give and take is unpredictable while feeling seamless. But it's Jewell who is bewilderingly adept across the fields of playing, writing and arranging skills, the latter of the three being the most impactful on this recording.

From a methodology perspective, Jewell's compositional approach bears some resemblance to that heard on Steve Coleman's Synovial Joints (Pi Recordings, 2015). While their music couldn't be more different, both composers incorporate distinctly different sound worlds and invent obscure lines of symmetry between structure and free form. This movement and association of sounds is critical on Volk and it seems to impart a slightly different experience with each listening. "At the End of the World, Where Lions Weep" is the lush opener that Jewell describes as an overture to the suite that makes up Volk. It crosses into "Pathos Logos," setting the stage for the improvisational blending of global influences that populate the album.

A traditional Finnish folk song—"Kun Mun Kultani Tulisi"—moves from the root melody to a controlled improvisation and leads to an Irish jig, "Give Us a Drink of Water." The traditional Celtic aspects of the tune dissipate as influences from classical to bop replace each other in an almost undetectable propulsion of change. "Pass Fallow, Gallowglass" marks a return to a more opulent sound only to open the door to Africa. "Gnawa Blues" and "The Master" share roots in the northwestern part of the continent and both incorporate elements of the blues. The traditional "Oh Shenandoah" is a respectful but modern reading and "Black is the Colour (of My True Love's Hair)" closes the album with a return to Appalachia.

The musicianship throughout Volk is superb. Jewell's solo interpretation of the closing piece is a thing of beauty. Loueke's bluesy guitar on "The Master" sings with emotion while Minaie's multi-faceted bass maneuvers the many changes within "Pass Fallow, Gallowglass." Naqvi alternately thunders and nuances and can be particularly appreciated through the shifts in "Give Us a Drink of Water." Belyamani finds a broad range of expression with the piano, taking it through classically influenced passages to heavily percussive effects. This album is broad in scope and political significance while being weighed down by neither. With Volk, we have Jewell as a master craftsman and an artist of extraordinary and intelligent vision. This is one of the best releases of the year; music to be listened to repeatedly and savored.

At the End of the World, Where Lions Weep; Pathos Logos; Kun Mun Kultani Tulisi; Give Us a Drink of Water; Pass Fallow, Gallowglass; Radegast; Gnawa Blues; The Master; Oh Shenandoah; Black is the Colour (of My True Love’s Hair).