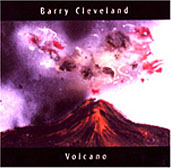 Barry Cleveland is an associate editor of Guitar Player magazine and, as such, could easily be mistaken for being more concerned with the logistics, technical rigours and, well, guitar godhood of someone who spends a lot of time focused on the craft of the instrument, rather than its potential for musicality. And there's little doubt that Cleveland has a full command of his instrument, both as a player and a shaper of sound, utilizing all manner of processing to create sounds that are at times distinctly un-guitarlike.

But what is most revealing about his approach, as evidenced by Volcano, is that Cleveland sees the guitar more as a means to an end rather than the end itself, and that places him firmly in the ranks of players more concerned with musicality than virtuosity. While some of what Cleveland does could be called fusion, it's not the kind that one normally associates with guitar antics, lightning fast soloing, and unnecessarily complex arrangements that are more about posturing than meaning and truth.

Cleveland is clearly intrigued by rhythm and its potential to open things up for thematic exploration. While there is plenty of improvising on Volcano, it's not in the context of defined solos. Instead, by using a bevy of percussion to explore African and Afro-Haitian rhythms, mostly courtesy of Michael Pluznick, who forms the core quartet with bassist extraordinaire Michael Manring and versatile woodwind multi-instrumentalist Norbert Stachel, Cleveland is then freed to draw on other sounds, natural and otherwise, to create a world view that is far more inclusive than exclusive.

ADVERTISEMENT
In the same way that guitarist Steve Tibbetts and percussionist Marc Anderson have created their own take on world music, arguably most successfully on the '94 ECM recording The Fall of Us All and '02's A Man About a Horse, Cleveland combines Western harmonies with those from farther afield to create an intriguing blend that can best be described by what it isn't rather than what it is. It isn't fusion per se, but it has some fusion elements, in particular some of Cleveland's guitar tones; it isn't exactly progressive, yet some of the complexities and thematic development might make it so; it isn't specifically world music although the multirhythmic approach, melodies, and some textures certainly would place it within that definition; and it isn't jazz by any stretch of the imagination, yet collective improvisation plays a large part.

So what, in the final analysis, is Volcano? It's a series of rhythm-based pieces that draw on inspirations from a multitude of sources to create a sonic landscape that becomes an entity unto itself. It's an album that leans towards Eastern harmonies and yet clearly comes from players with a Western background. And, in the end, it's an appealingly multilayered aural experience that continues to reveal new things with every listen.

Visit Barry Cleveland on the web.