By JEFF DAYTON-JOHNSON
August 5, 2012
Sign in to view read count 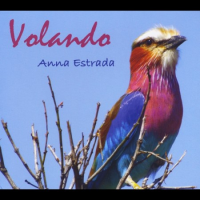 Vocalist Anna Estrada's Volando can be comfortably shelved in the Latin Jazz section of your record library, but Estrada herself more fancifully—and more accurately— describes it as an exercise in crossing borders. Given the record's title ("volando" means "flying"), it's perhaps more a matter of flying over those boundaries. There are at least four such frontiers across which Estrada and her ensemble blissfully soar back and forth.

The key dividing line is that one that separates Latin American from other popular music. Estrada demonstrates that this border is pretty heavily trafficked in both directions. She offers a lively Latin-ization of Anglo tunes like "Everybody's Talking"; and rescues the Latin- ness of other tunes, as with "Cuando vuelva a tu lado," the Spanish-language original that would later be transformed into Dinah Washington's hit "What A Diff'rence A Day Makes," or Cole Porter's "Begin the Beguine," here given a very mellow bossa-nova treatment, and which had a very Latin melody to begin with.

Estrada and her solid band—most songs are grounded either by guitarist Raymond Scott or keyboardist Jonathan Alford, with fine horn arrangements by trombonist Al Bent—trespass across other borders too, like the Treaty of Tordesillas line that separates Latin America into Spanish-speaking and Portuguese-speaking halves. Convincing Afro-Cuban fare alternates with a variety of idiomatically handled Brazilian numbers.

Then there's the temporal boundary in popular music, before and after Elvis, and Estrada embraces standards on both sides of that line. In this connection, her The Beatles medley merits special discussion. Latin jazz is no stranger to the Fab Four: Eddie Palmieri's excellent "Una rosa española," with vocalist Lalo Rodríguez, from The Sun of Latin Music (Coco, 1973), is a Spanish language embellishment of "You Never Give Me Your Money." Estrada also draws upon Abbey Road (Apple, 1969), the source of the Palmieri track, for the appropriate "I Want You," but pairs it with John Lennon's surrealistically unlovely "Happiness is a Warm Gun"—not the most likely choice. In fact, it's not even the most likely choice among tunes found on Side 1 of the White Album (Apple, 1968), but, then, it's musical decisions like this that prevent Estrada's record from being bland or predictable.

Finally, the Estrada group transits easily between the loud and the soft. "Dueño de Mi Corazón," in fact, is presented in both a rousing ensemble reading and a plainspoken acoustic guitar-with-vocal version. The memorable composition could have come from the songbook of the venerable Colombian rock 'n' roll band Aterciopelados; moreover, Estrada's warm, smooth, yet sharply defined voice bears a striking similarity to that of Aterciopleados front woman Andrea Echeverri. (Both groups ought to consider covering the other's material.)

Estrada clearly hopes to address a broad audience. This set of assured, relatively relaxed performances deserves to find just such an audience, one that delights in border crossing as much as the singer.